Cherokee Preservation Foundation has announced the development of a new interactive report titled From Transactional to Transformational that describes some of the unique challenges of place-based grantmaking on tribal lands and in rural areas and highlights strategies for success that may be helpful to other funders.  The interactive report, which may be viewed at www.cpfdn.org/transformational, draws on lessons the Foundation has learned during its first decade of work.  It includes videos and pictures highlighting grantees and their work.

Over the past decade, Cherokee Preservation Foundation has moved from a 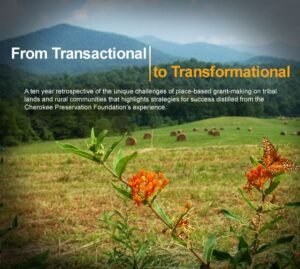 transactional strategy typical of mainstream U.S. philanthropy to a transformational strategy that is better suited to the realities of place-based funding on tribal lands. In a transactional strategy, the funder is typically focused on developing innovations or evidence in a particular program area. The funder chooses from among a wide range of potential grantees to find the ones that are most capable of making progress in that program area. There is not a long-term commitment between the funder and the grantee, and the funder typically does not see organizational development as a key part of most grant transactions.

In a transformational strategy, by contrast, building capacity and developing community leadership are as important as making progress in a particular program area. The Foundation becomes an engaged partner with the grantee, and the relationship becomes one of shared learning and collective action. The Foundation has a long-term commitment to the community and the grantees, which makes a shared vision for the future and a shared commitment to learning and growth both necessary and potentially very productive in the long run.  From Transactional to Transformational addresses:

“From Transactional to Transformational adds to the knowledge base about place-based grantmaking, and we believe it will be helpful to both traditional and place-based funders,” said Susan Jenkins, Executive Director of Cherokee Preservation Foundation.  “The videos and pictures also bring home the point that many positive changes have occurred over the last ten years as a result of relationships, programs and projects that have transformed the Qualla Boundary, the homeland of the Eastern Band of Cherokee Indians.”