Writers from around the country came together to discuss the topic of American Indian writing and its evolution into the 21st Century this week in Cherokee.  The 3rd Annual Southeastern Indian Writers Gathering was held Sept. 12-13 at the Museum of the Cherokee Indian. 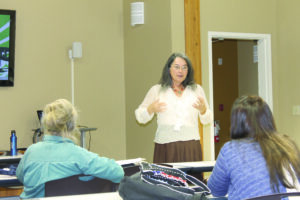 Betty Cloer Wallace, a Gathering attendee from Franklin, wrote a series of short novels known as The Tuckaseegee Chronicles which delves into the relationships between Cherokees and Scottish immigrants in the 1700s.

“I’ve been working on this for the past thirty years and I come over here to learn all I can,” she said.  “Learning the technology for social media and learning how to market your story is one of the things that’s most appealing to me.”

Wallace continued, “Wordcraft Circle and Robert Conley from Western (Carolina University) have both contributed heavily to this.  I’ve been very impressed with everything that they’ve pulled together for the Southeastern Writers Gathering.”

Conley, a member of the United Keetoowah Band of Cherokee Indians of Oklahoma, is the Sequoyah Distinguished Professor of Cherokee Studies at WCU and was the driving force behind organizing the first two Gatherings.

Lee Francis IV, a member of the Laguna Pueblo from New Mexico, is the national director of the Wordcraft Circle of Native Writers and Storytellers and helped organize the Gathering.

He gave a lecture on Thursday entitled “Digital Smoke Signals: Social Media and the Professional” which detailed how Native writers can utilize social media such as Facebook and Twitter to market their work and interact with other writers.

“Social media is often in-depth, but it doesn’t have to be scary,” said Francis.  “It’s a great way to teach a wide audience.”

Roseanna Belt, WCU Cherokee Center, was in attendance and related, “Yesterday, we went to Cherokee High School and the participants here, particularly the writers, spoke to the high school students in an English class.  Lee Francis was so excited from the interaction that he wants to keep doing that so not only does it help the people actually with this group, it will affect the school and get kids to write.”

“It’s felt that they (students) are sort of timid about it now, but they have all that talent and knowledge if we can just help it come out.  That’s the main thing I like about this Gathering.”

JoAnne Grandstaff, Kickapoo, gave a lecture entitled “Coding Our Language: Utilizing Digital Technology in Language Revitalization” where she spoke about the importance of saving Native languages.

“I don’t like the term revitalization,” she said.  “I prefer to say reacquire.  Until we raise the prestige of our languages with our children, they will never speak our languages.”

Grandstaff showed the group a short film she made while researching languages entitled “Cherokee Language in the City of Lawrence, KS”.  The film featured two Cherokee speakers discussing their experiences with knowing and speaking their native language.

During her lecture, a discussion arose about educators allowing American Indian children to use their native language at school without fear of repercussions.

“Maybe kids will one day be able to walk down the hall speaking their own language,” Grandstaff said of her hopes for native languages.