Construction winding down on casino expansion

The massive expansion at Harrah’s Cherokee Casino & Hotel is nearing completion.  Work is expected to be finished on the $633 million expansion, which was approved in January 2007, in about two months. 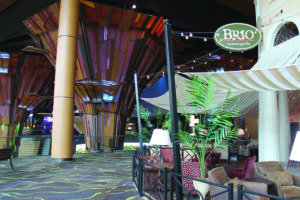 The BRIO Tuscan Grille and the Grand Rotunda are two of the latest projects to be completed of Harrah’s Cherokee Casino & Hotel’s $633 million expansion. (SCOTT MCKIE B.P./One Feather)

James Bradley, Harrah’s Cherokee advertising and public relations department, related that construction on the new spa, the last component of the expansion, should be finished by November or December.  The two-story Bolognese-style spa will offer the usual spa features as well as Cherokee herbal medicines and remedies.

Bradley said the response from guests on the expansion so far has been nothing but positive.  “They like the new retail space, and they like that they can bring their kids and family in to the new restaurants.”

Another added feature from the expansion is the Events Center, which opened in September 2010.  The Center is a 3,000+ seat venue which has hosted some big names in the entertainment industry including:  George Jones, Reba McEntire, Montgomery Gentry, DJ Pauly D and others.  Up until now, the venue has only been open to those patrons 21 years of age and older.

A light feature, representing water droplets on a spider web, decorates the escalator ride to the Grand Rotunda area.

That will change as a performance of the Moscow Ballet’s Great Russian Nutcracker on November 24 is open to all ages.  There will be two show times (3pm and 7:30pm) and the cost of tickets is $21, $31, and $46.

Bradley said the show will be a test of sorts to see how well the Center can handle all-ages performances.

All of the expansion has brought jobs…lots of them.  Bradley said 200 people are set to enter new hire orientation which brings the total of new jobs created by the recent addition of live table games to over 500.  And, there are more to come.  He said they are still hiring part-time table games dealers and could add another 250 jobs.

The Poker Room currently has video poker tables and is expected to offer live poker games in Spring 2013.  Harrah’s Cherokee will host a stop of the World Series of Poker on April 4-15.