Diggin’ into the past

The earliest occupation of people on the Ravensford property, the site where the Cherokee Central Schools buildings are located, is 8000 B.C.  That was just one of the many fascinating facts presented at the 2nd Annual Cherokee Archaeology Day hosted by the EBCI Tribal Historic Preservation Office (THPO) at the Chestnut Tree Inn on Friday, Sept. 7. 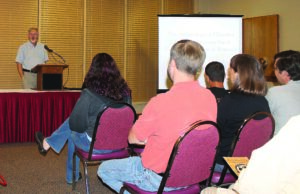 “The first goal was to get all of the information on all of the archaeology that’s been done collaboratively around the Cherokee world back into the Cherokee community,” said Russell Townsend, EBCI tribal historic preservation officer.  “Invite the Cherokee people to come, learn about this stuff, meet the archaeologists and ask them the questions they want to ask.  So, I think we were very successful.”

He related another goal of the event was to bring the researchers and archaeologists who are working through the THPO together and “try to spark some collaboration between some of these folks.”

Townsend said he was overwhelmed with the turnout for the event.  “I thought we’d be lucky to get six or eight, but to get 18 speakers is phenomenal.”

He said that he is not aware of another archaeological symposium held on tribal land and hosted by a tribe anywhere in the country.  “Here, east of the Mississippi, this is a unique event and it surpassed my expectations.”

Dr. Brett Riggs, research archaeologist at UNC- Chapel Hill, gave a talk entitled “The Archaeology of Cherokee Life at the Time of Removal”. 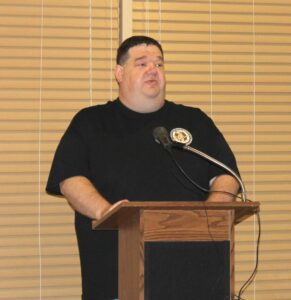 Dr. Riggs, who has worked for and with the Eastern Band of Cherokee on various projects since the early 1990s, commented, “These mountains, here in southwestern North Carolina, have been the home of Cherokee people since time immemorial.”

During his talk, he told of the various towns, homesteads and farmsteads of Cherokee people in the years leading up to the 1838 Removal.

Jokingly, he then added, “He’s the first archaeologist to have a name in Cherokee that’s not vulgar.”

“It brings back into focus who our ancestors were and how far we have removed from that in some respects,” said Amy Walker, an EBCI tribal elder from the Yellowhill Community who said she thoroughly enjoyed Friday’s event.  “I know we have to live within the times today, but the values are still needful and are being used within certain families here today, and that’s what really makes us Cherokee.”

Walker said she hasn’t always cared much for anthropologists and archaeologists.  “I just felt that they just wanted information and didn’t help the living Native peoples of this day.

She said it’s important for all to remember that American Indian people are still alive.  “It’s important that we not let that be lost as we have moved into the 21st Century.”