Massachusetts senatorial candidate Elizabeth Warren addressed delegates in a prime-time speech on the opening day of the Democratic National Convention on Wednesday, Sept. 5.  Her speech was met with little controversy. 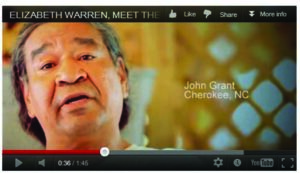 EBCI tribal member John Grant, Sr. is shown in a screenshot of a video produced by the Massachusetts Republican Party on Elizabeth Warren’s claims of Cherokee heritage.

The same is not true throughout Indian Country as many are questioning her claims of Cherokee heritage.  Eight EBCI tribal members are featured in a video blasting Warren and asking her to prove her claims.

The video, produced by the Massachusetts Republican Party, is entitled “Elizabeth Warren, Meet the People of Cherokee, NC” and can be viewed on YouTube at https://www.youtube.com/watch?v=lm3MYBDyNyQ.

“Anyone that is a professor should have some type of ethics,” Dale French said in the video.  “How can you trust a person like that?”

Warren, a Democrat running against incumbent Sen. Scott Brown (R-Mass.), has come under fire since it came to light that she identified as a Cherokee Indian while employed at Harvard Law School.

“It’s not right at all,” John Grant, Sr. said in the video.  “She’s lying to the American public…if she’s claiming that she’s Native American, prove it.”

Lisa Montelongo (misidentified in the video as Lisa Bowles) said in the video, “Can she come home and stand here and say who her relatives are and they’ll come down and greet her and take her up to their community?”

A blog has popped up entitled Cherokees Demand Truth from Elizabeth Warren.  The blog is operated by a group claiming they have 156 members who are all enrolled members in one of the three federally-recognized Cherokee tribes.

The group states on its blog, “It is time to hold Elizabeth Warren accountable and stop marginalizing the authentic American Indians who genuinely care about our people.  We have some serious issues in Indian Country – violence against women, high rates of youth suicide, diabetes, poverty, etc.  Warren has never tried to do anything to help with these issues.  She doesn’t even seem to acknowledge such issues.”

Sen. Brown has remained relatively quiet on the issue but did tell Masslive.com in May, “I’m asking for the same things I’ve asked for from the beginning: for Elizabeth Warren to tell the truth and answer the questions you guys are asking.”

Requests for comment from the Massachusetts Republican Party and Elizabeth Warren were not returned by press time.