Social inequalities are a major source of explaining health differences among populations worldwide according to Richard Wilkinson, professor emeritus of social epidemiology at the University of Nottingham Medical School in England. 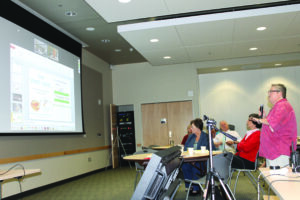 Wilkinson delivered the third annual Public Lecture on Indian Health at Western Carolina University on Wednesday, Sept. 5 via a live internet feed from his home in Great Britain.  The lecture, entitled “Inequality: The Enemy Between Us”, was simultaneously viewed by students at WCU, the University of Tennessee – Knoxville and Wake Forest University.

“I’m not going to talk about Indian health today.  I’m going to talk about inequality.  I think material differences give rise to social distances,” said Wilkinson who related that overall health is worse in poorer areas and problems such as drugs, crime, teen pregnancy, and others increase with income inequality.

He related that mortality rates not only differ from country to country but from zip code to zip code.  “It’s more about social status than income.”

During research on the topic, Wilkinson created an index of health and social concerns by taking rates of life expectancy, math and literacy competency, infant mortality, teenage births, obesity, homicides, and mental illness. The overall health of the United States per his index was the worst in the world.

“There is a clear tendancy for more unequal countries to do worse.”

But, how unequal is America?

Japan, whose richer are only 3.4 times as rich as the poorest 20 percent, showed much better health scores than those with higher rates of inequality.

“We often joke that if people want to live the American dream, they should go to Denmark (which also reported a lower rate of inequality),” said Wilkinson.

“What we’re dealing with is the social pyramid…more differences produce more feelings of superiority and inferiority.”

Vickie Bradley, EBCI Deputy Health Officer, was in attendance at Wednesday’s lecture.  “I think that our suspicions of social inequality were confirmed by his research first of all.”

She said Cherokee does have an increased number of health disapirities.  “Those health disparities and determinants have been changed due to the influx of gaming dollars and have improved the health conditions and the health status, but we still have a long way to go.”

“I think that we’re just a reflection of the broader research.  If we look at our smaller communities and see the income inequality, there is a definite relation.”

She said Cherokee is very fortunate to be a close-knit community where health determinants can be more easily addressed.  “With the support of Tribal leadership supplementing those things that a lot of societies can’t necessarily afford like health care, I think we’re very fortunate.”

Dr. Ann Bullock, EBCI Health & Medical Division medical consultant, thanked Wilkinson for his work and addressed him directly via the internet connection.  “As you are probably aware, the poorest county in the United States for many years has been on the Pine Ridge reservation in the Dakotas.  And, the issue of inequality in our population was really brought home to me when I attended a conference in Scottsdale, Ariz. and looking across a dry river valley and the Salt River Pima reservation is literally a stones throw away from one of the richest communities in the world.”