CHARLOTTE – A group of students, all EBCI tribal members, visited the Democratic National Convention site on Friday, Aug. 31.     Most of the students who attended are also members of the Junaluska Leadership Council (JLC) and visited the Convention to learn more about government and the federal election process. 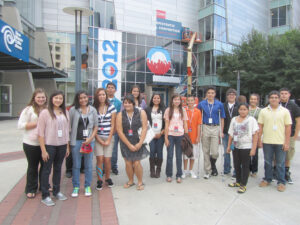 “The trip went great!” said Radonna Crowe, JLC advisor.  “It was a unique, once-in-a-lifetime experience.  Dr. Marquez was our tour guide and she explained to us that President Obama and the First Lady wanted the most grassroots convention possible and wanted to bring in community members.”

“I was thrilled that when they were planning the invitations that they thought of youth from the Eastern Band of Cherokee Indians,” added Crowe.  “It was an honor to be included.  It gives our youth exposure to the process of what happens at the convention as well as the nomination processes of our federal government.”

The students learned about the planning it took to organize the Convention and they took a tour of the Convention site including the delegate seating area, the stage and the all-important podium area.  “The security on the floor was exactly the way you would expect, and you were closely monitored,” said Crowe.

“I hope that this experience encourages the students to learn more about our federal government and understand how important it is, as Native Americans and American citizens, to vote in state and federal elections and to learn about the candidates running for offices and what their views are and how that affects not only the United States, but Native Americans as well.”