Lyric Alan Rogers, 3 ½ months old, of Wolftown Community in Cherokee, went home to be with the Lord on Sunday, July 29, 2012 at Cherokee Indian Hospital. 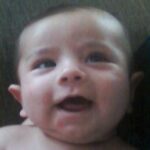 He was preceded in death by two cousins, Kyle Davis and Ryan George.

Funeral Services will be held 11am on Thursday at Tow String Baptist Church. Rev. J.T. Lambert will officiate with burial in Tow String Cemetery.

The body will be taken back to the Church at 4pm Wednesday by Crisp Funeral Home to await the service hour.