For many, it’s exciting to know that the 2012 Summer Olympic Games begins today in London, England, and will continue through Aug. 12.  Even more exciting is that the Native American community is being represented by four young women participating in four different sports, synchronized swimming, boxing, water polo and dressage, respectively. 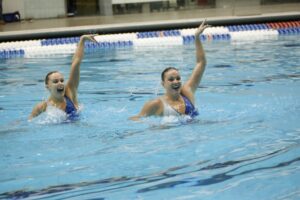 Mary Killman (right), a member of the Citizen Potawatomi Nation of Oklahoma, is on the U.S. Synchronized Swimming team. (Photo by John Bragg)

These women, hailing from different nations across the Americas, are all competing in their very first Olympic competition, vying for their shot at a gold medal 100 years after Jim Thorpe won two gold medals at the 1912 Stockholm Olympics.

If they’re successful at medaling during the 2012 games their names will join Billy Mills, Oglala Sioux, who won gold at the 1964 games, and Duke Kahanamoku, a Native Hawaiian and Olympic swimmer, who, like Thorpe, won gold at the 1912 Stockholm games.

Mary Killman, born in Ada, Oklahoma, 21, is a member of the Citizen Potawatomi Nation.  She is half of the 2012 U.S. Synchronized Swimming team alongside partner Mariya Koroleva, who, in fact has dual citizenship with the United States and Russia.  Killman was a member of the USA Synchro Junior Nationals Team in 2008 and was named the USA Synchro Athlete of the Year in 2010 and 2011.

“Representing the United States is an amazing honor,” she said.  “To be able to not only represent my country, but also my sport, and have a bit of Native American pride as well just makes it all better!” 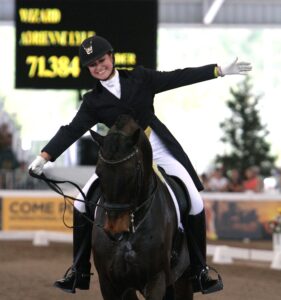 All the hard work and training she has put into making it to where she’s at today has been lined with confidence, something she feels is crucial to success.  “The most powerful thing you can have is confidence in yourself,” says Killman.  “There are always going to be rough times but if you keep pushing and just believe you can, you can achieve things you’ve only dreamed about.  This works in not only athletics but in life in general.  I’ve worked years trying to make my dream a reality and it’s finally coming true.”

One of Killman’s heroes is the above-mentioned Thorpe.  “He’s definitely someone who had to work insanely hard to get every bit of recognition he got.  He’s proof that you can do anything if you set your mind to it…I’ve always been brought up with something my dad always said, ‘rather you can see yourself doing or not, you’re right.”

The 2012 London games marks the debut of women’s boxing and First Nation Ojibway Mary Spencer set off as one of Canada’s best bets; a sure contender for gold.  Spencer nearly lost her chance of competing in this year’s game after a surprising and disappointing first round loss at the women’s world championships in China that served as the qualifier for the 2012 Olympics.  A few agonizing weeks later, she learned she had been awarded the wild card and became the lone Americas Continental group selection by the Tripartite Commission in the middleweight (75kg) class. 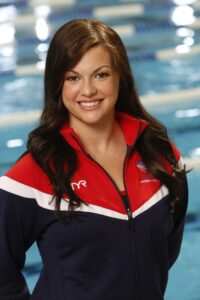 Spencer began boxing in 2002 at the age of 17.  In an interview with the International Amateur Boxing Association she said, “I was always a sports fanatic and I took up boxing after my basketball season ended and I wanted to keep in shape.  Since then I have not looked back, the energy in boxing is unrivalled in sports.”

From her beginning days in the sport, she has been described as a natural and very quickly started training under three-time Olympic coach Charlie Stewart at the Windsor Amateur Boxing Club in Ontario, Canada.  Under his guidance and her hardwork, she’s become an 8-time nation champion, 3-time world champion and 5-time Pan-American champion.

Not only is she a fierce fighter in the ring, she’s proof positive there’s true splendor in being a strong woman as she was named as an ambassador for Cover Girl.  Of the endorsement Cover Girls says they are, “proud to support Mary Spencer to help celebrate the power and strength in beauty.”  She is also a member of the Motivate Canada’s GEN7 Aboriginal role model initiative.  Her participation in the program includes developing sport, physical activity and empowerment programming with Aboriginal youth in First Nation communities in Ontario.

Tumua Anae heads into the 2012 games as the goalie for the US National Water Polo team.  Anae, full name Tumuaialli Anea, is a Native Hawaiian whose grandfather emigrated there from Samoa in the 1920’s.  She now resides in California and is an active member of the Church of Latter-day Saints and as the only Mormon on her team she’s said her team knows of her religious beliefs.

Tori Ackerman, of the Deseret News, reported Anae as saying, “When we go out on a team trip and go out and they drink after a game win or big tournament they say, ‘Oh yeah, Tumua can’t come, she’s Mormon,’ or ‘Tumua you can’t watch-this movie is bad and you’re Mormon,’ but they all respect that and I’m used to that.’”

Tumua attended the University of Southern California where she majored in broadcast journalism.  While at USC, she played goalie for their water polo team all four years of her college career and then began training with the National team the summer after her senior year. One the road to becoming an Olympic athlete, Tumua racked in honors with her incredible talent in the pool.  Among other things, she was part of the 2005 and 2006 CIF Water Polo Champions Division II, a finalist for the 2010 Peter J. Cutino Award and 2010 NCAA champion.  More recently, she had 8 saves as backup goalie at the 2011 FINA World Championships as well as the 2011 FINA World League Super Final, in which she won gold, 7 saves in Team USA’s gold medal win at the 2011 Pan American Games, and a whopping 16 saves at the 2012 FINA World League Super Final.  Finally, in May of this year, she was selected to the Olympic team as backup to Betsey Armstrong, whom many consider the best women’s water polo player in the world.

Adrienne Lyle, a Cherokee Nation citizen, comes to her first Olympic games as one of America’s youngest dressage riders at the age of 27 in a sport that commonly has Olympians double her age.  She earned her spot by placing fourth-place at the U.S. Equestrian Federation Dressage Festival of Champions and USEF Dressage Olympic Selection Trials while riding Wizard, a 13-year-old Oldenburg gelding by Weltmeyer.

Lyle, coming from humble beginnings being raised on a small cattle ranch in Whidbey Island, Wash., shot to stardom in the dressage world after working some with Debbie McDonald (an extremely successful dressage rider in her own right) as a working student at Peggy and Parry Thomas’s River Grove Farm in Idaho in 2005, in 2006 as a fulltime assistant trainer and then competing with Wizard in their first Grand Prix in 2009.

These young women exemplify where hard work, discipline and the courage to put your dreams in motion can lead to.  Many throughout Indian Country will be keeping an eye on these ladies as they strive for gold in these coming weeks.