Cherokee blowgun and dart making is not as popular as basket making. A step forward getting more EBCI tribal members into learning how to make these items began in Snowbird this week.  A class hosted by Qualla Arts & Crafts, funded by the Cherokee Preservation Foundation, was held at the Junaluska Museum in Robbinsville on Monday, July 23. 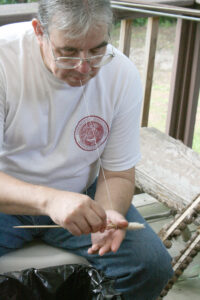 Davy Arch demonstrates how to attach thistle to a blowgun dart during a class in the Snowbird Community on Monday, July 23. (DAWN ARNEACH/One Feather contributor photos)

The class was led by Davy Arch, manager of the Oconaluftee Indian Village. He brought several examples of blowguns and darts that he has made over the years.

“I am excited to see people wanting to preserve this part of the Cherokee culture,” said Arch.  “Having the class and seeing people enjoy learning about the blowgun and darts makes it all worthwhile.”

The class started with learning about the thistle and how to get it ready to attach to the shaft of the dart. Pulling the dark pieces out first, then removing the husk to be able to knock of the seeds from the bottom, sounds easy, but is a little tricky and you can lose a whole pod with a little slip up.

Once the class had the thistle set and ready, they set the dart up in their hands and held the string in the mouth to keep tension on it and began twisting the dart to lay down the rows of thistle. After seeing how their dart looks with one pod of thistle some even added a second pod to make it bigger and fuller. Once they were satisfied with the way the dart looked, they would go back with the point of another dart and knock out pieces that didn’t get under the string, then turn the dart upside down and spin the loose pieces off.

Dart-making may sound difficult, but the blowgun itself is a workout.  Arch first showed the class how to hold the river cane over a flame to start heating it up for bending. He explained how to look down the cane for the bends, and also not to bend too much at first, just to keep moving from one section to another and back and forth, letting the cane cool down in between to see if more bending is needed. Once they felt their cane was straight enough, Arch showed them how to use a piece of steel with an L-bend for a grip or handle, and to place it inside the cane to start knocking out the joints. Once the joints are knocked out, he took another piece a little larger to start “filing” down the inside of the joint so that the dart, when used, will go through the blowgun easily. 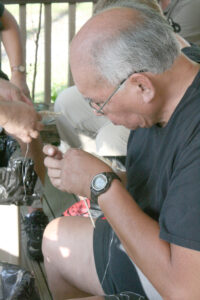 Lloyd Arneach, Sr., a tribal elder from the Yellowhill Community, works on his thistle.

Even though learning about the blowgun and the darts was the main point of the class, listening to the them swap stories of growing up, other crafts they have tried and asking each other things about legends made this class seem relaxed and fun, seeing Cherokees gather and share no matter what community, made this a true Cherokee class.

To view more photos from this event, please visit the One Feather photo gallery at:

Dawn is the outreach coordinator at Qualla Arts & Crafts, funded through the Cherokee Preservation Foundation.