Brian Burgess, 42, completed his twelfth marathon and seventh Grandfather Mountain Marathon on Saturday, July 14.  His goal in accomplishing this feat was to honor his brother-in-law Philip Walden, Jr., who passed away in 2011. 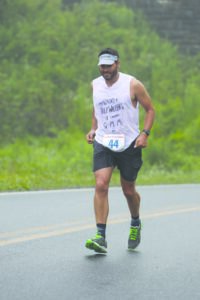 Brian Burgess, a member of the Cherokee Runners, works hard as he completes the Grandfather Mountain Marathon, his twelfth marathon, on Saturday, July 14. (Photo courtesy of Gerri Grady)

When Brian began running at age 20, it was Philip who challenged him and inspired him to run.  He began running segments until he could run a mile without stopping.  As he progressed, his mileage increased to three then to six and beyond.  Brian’s first full marathon was in the redwood forest of Northern California in 1999.  He and Philip completed the race in 4:01:00.

With Philip, Brian completed the Grandfather Mountain Marathon five times, but Philip completed it 10 times overall.  Grandfather is a challenging course with dramatic elevation gain and loss during the first 13 miles, and a constant elevation gain the last 13 miles. The run ends at McCrae Meadows Stadium during one of the world’s largest highlands games events.

Of the course, Brian said, “The last .2 mile is actually a pleasure; it makes runners feel as if they are in the Olympics, trying to squeak out a bronze medal.  Marathons are funny that way, no matter if you finish 457th out of 3,000 runners, there is always a micro-competition going on between you and the pack that you pace with.”  The Grandfather Mountain Marathon is a physically demanding course, on a very scenic route, with a spectacular finish.

In addition to running, Brian is an avid swimmer at the Cherokee Life Center during winter, mountain biker in the fall and white water kayaker in the spring and summer.   He has also competed in a half iron man triathlon and a few sprint triathlons.

Brian believes that running is a great way to maintain body weight, decrease stress, and increase self-image.  It helps him feel better and to be more optimistic when he runs regularly.  He said, “I’ve always thought it peculiar that the more energy I expend on a regular basis, the more energy I have. Running a long event such as a full marathon has really helped me with other situations in my life. Sometimes you have to pace yourself, stay focused, and never quit.”