Uniting the flame at Kituwah

Uniting their people, the leaders of the three federally recognized Cherokee tribes stood atop Kituwah Mound holding firepots the night before the historic Tri-Council meeting.  The event occurred on Thursday, July 12 and their firepots were lit from torches carried by EBCI youth Connor McCoy and Priscilla Squirrel. 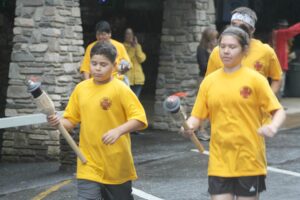 EBCI tribal members Connor McCoy and Priscilla Squirrel lead out the Flame Run from the Mountainside Theatre on Thursday afternoon.

McCoy and Squirrel led a group of runners from the Mountainside Theatre’s eternal flame to Kituwah for the event.   Fire was taken and preserved on the Trail of Tears and still is kept in several communities in Oklahoma.  Many hope to bring that fire back to the Eastern Band of Cherokee and Kituwah.

“I don’t have to tell anyone how special this place is,” said Principal Chief Michell Hicks as he addressed the crowd of several hundred.  He was joined on the Mound by Cherokee Nation Principal Chief Bill John Baker and United Keetoowah Band Principal Chief George Wickliffe.

“While we were on the Mound, there was talk of how to properly bring the fire back to the Mound,” Chief Hicks said.  “The fire is already here.  It’s just a matter of how do we, as Cherokees come together; how do we join together?”

Standing atop the Kituwah Mound, Big Cove Rep. Bo Taylor tells the crowd about the importance of the unification of the fires within the three Cheroke tribes.

He said the fire will return, but related, “It just wasn’t the right time.  There’s got to be more planning, more talk and more discussion.  But, there will be a right time.”

Earlier in the day, prior to the runners leaving on their journey to Kituwah, Big Cove Rep. Bo Taylor told the group, “We are one people, one nation, under one fire.  To our people, fire is a symbol that has been there from the very beginning.  We always say that we came from the fire at Kituwah.”

Gil Jackson, a fluent Cherokee speaker, was one of the runners who made the journey from Cherokee to historic Red Clay in 1984.  He told Thursday’s runners, “You are carrying the symbol of the eternal flame.  It is part of us.  It is who we are.  We are one tribe, one language.”

Rep. Taylor recalled talking to an elder who told him, “One thing we have to remember is that flame is just a flame.  The eternal flame is the one that lives within our soul.”

Thursday evening’s program at Kituwah also included a meal for the hundreds in attendance, a mound building ceremony, and a Friendship Dance led by the Warriors of Anikituwah.

For more photos from these events, please visit the One Feather photo gallery at: