Cherokee Tribes come together for Tri-Council

History was made at the Chief Joyce Dugan Cultural Arts Center on Friday, July 13.  For the first time, the three federally recognized Cherokee tribes came together for an official meeting. 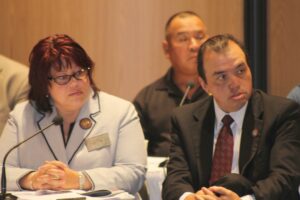 “Completing the Circle of Fire” was the theme for Friday’s historic Tri-Council meeting.

“The Removal in 1838 separated our people,” said EBCI tribal member Shawn Crowe who served as emcee for the event.  Today is a historic event as all three now come together.”

He continued, “It means a lot to see our people come together as one.  We are not three separate entities anymore.  We are now one.”

The chiefs of the three tribes addressed the crowd to open the event.

United Keetoowah Band Principal Chief George Wickliffe commented, “Our elders have always said we will come together again one of these days and the time has come so let’s make it count.”

Principal Chief Michell Hicks stated, “The fire is within us…I know we’re not always going to agree on everything, but there is a time to set things aside.”

Even with the air of a family reunion, Friday’s event was still a business meeting and the Tri-Council did take on several tough issues passing resolutions in favor of the reauthorization of the tribal amendments in the Violence Against Women Act (VAWA), authorizing the incorporation of Cherokee Syllabary into the U.S. Library of Congress Romanization Tables, resolving to continue work to retain the Cherokee language and traditions, and approving a “consortium method” to fight diseases affecting Cherokee people such as diabetes. 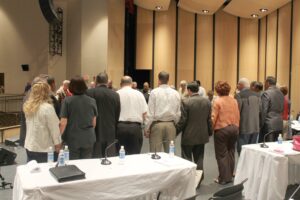 Tribal leaders of the three Cherokee tribes formed a circle and held hands for the closing prayer for Friday’s Tri-Council meeting.

Several other issues were discussed including the Intellectual Property Rights of Cherokee people, the Emissaries of Peace 250th Anniversary, and a report was given from the Trail of Tears Association.

One major decision made during the meeting was to have a Tri-Council meeting each year with the hosting duties rotating yearly.  Cherokee Nation agreed to host the 2013 meeting and the United Keetowah Band is slated to host in 2014.  The meeting will come back to Cherokee in 2015.

“We’re all the same,” Big Cove Rep. Perry Shell said at the end of the meeting.  “Hopefully, we can go from here with that same spirit.”

Yellowhill Rep. B. Ensley summed up the overall feeling and intent of the meeting, “We’ve got to work together and become stronger as a nation.”

For more photos of this event, please visit the One Feather photo gallery at: