Museum of the Cherokee creates programs in Pennsylvania

On July 7 and 8, fifteen EBCI tribal members presented programs in Farmington, Pennsylvania, at Fort Necessity National Battlefield.  The Museum of the Cherokee Indian coordinated the event in conjunction with the display of their exhibit at the national park, “Emissaries of Peace: the 250th Anniversary Exhibition.” 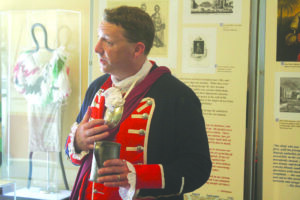 Lt. Henry Timberlake, portrayed by Travis Henline, stands in front of the Emissaries exhibit at Fort Necessity. (Photo courtesy of the Museum of the Cherokee Indian)

“We are glad to be able to tell this important part of the Cherokee story in Pennsylvania,” said Ken Blankenship, Executive Director of the Museum.  The traveling exhibit and accompanying programs were created to celebrate the 250th anniversary of Timerlake’s and Ostenaco’s journeys, which culminated in three Cherokee leaders having a diplomatic meeting with King George III of England.

More than one thousand people attended the weekend event, according to Mary Ellen Snyder, Chief of Interpretation and Visitor Services at the park.  “This was a very successful special event despite record breaking heat,” Snyder said.  “Visitors had an educational and fun weekend.”

Fort Necessity National Battlefield has made a commitment to telling the stories of the tribes who participated in the French and Indian War.  Cherokee warriors fought as allies of the British from 1755-1759, putting groups of 600-800 men at a time into the war as far north as the Ohio River Valley and Lake Erie. George Washington asked Cherokees to train his troops in backcountry war tactics.

In addition, Timberlake and Ostenaco gave talks twice daily on Saturday and Sunday, enabling visitors to travel back in time to 1762.  Timberlake was portrayed by Travis Henline, Director of Independence Hall in Wheeling West Virginia.  Ostenaco was portrayed by John Bullet Standingdeer, EBCI, who was also chosen by Colonial Williamsburg for Ostenaco’s role in their documentary film “Emissaries of Peace.”

The weekend programs were sponsored by the National Park Service, Friends of Fort Necessity, Museum of the Cherokee Indian, and the Cherokee Preservation Foundation.  The next program celebrating the 250th anniversary year will be at Colonial Williamsburg July 18-22. For more information: www.cherokeemuseum.org.