Note: This article was updated with new information at 12:05pm on Friday, July 6.)

A severe thunderstorm, with high winds, rolled through the area on the night of Thursday, July 5 leaving two dead and lots of debris to be cleaned up. 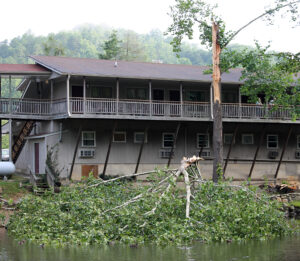 Due to high winds from a thunderstorm on Thursday night, a tree split in two behind the Drama Inn in Cherokee. (SCOTT MCKIE B.P./One Feather photos)

Cherokee Chief of Police Ben Reed related that there were no reports of injuries or major damage in Cherokee.

The Great Smoky Mountains National Park confirmed two fatalities as a direct result of the storm.  “A motorcycle rider was killed on Little River Road approximately ½ miles east of the Townsend Wye.”

According to the Park, the rider was Ralph Frazier, 50, of Buford, Ga.  He was hit on the head by a falling limb and pronounced dead at the scene.  The passenger on the motorcycle was uninjured.

The other fatality in the Park was Rachael Burkhart, 41, of Corryton, Tenn. , who was hit by a tree and pronounced dead at the scene.  The incident occurred near the Abrams Creek Campground off Cooper Road Trail.  Park officials related that a large tree fell on four people killing Burkhart and injuring three others.  A girl, 7, was swimming when she was hit and knocked unconscious.

“The father of the 7-year-old girl was struck by the same tree and sustained fractures to vertebrae, multiple broken ribs and a collapsed lung,” Park officials related.   “The mother of the girl was also injured by the same tree.  Her injuries are less serious.”

The father and daughter were flown to the UT Hospital in Knoxville, Tenn. 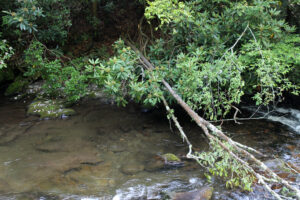 A small, downed tree lays across a creek in the Great Smoky Mountains National Park the morning after high winds and a thunderstorm swept through the area.

Three other injuries were reported in the Park as a result of the storm including: an instance of cardiac arrest at Cades Cove Campground, a man hit by a tree sustaining a back injury on at the Methodist Church on Cades Cove Loop Road and a man suffering an eye injury at Cades Cove.

The Park reported numerous downed trees on Little River Road and Laurel Creek Road and the areas of Cades Cove and Abrams Creek.