The showpiece of the expansion at Harrah’s Cherokee Casino, the Grand Rotunda, opened on Friday, June 29.  The Rotunda features LED lit trees that are 75ft. tall, a humongous 140ft. long LED screen, twin waterfalls that are 68ft. each, two escalators and a spiraled staircase. 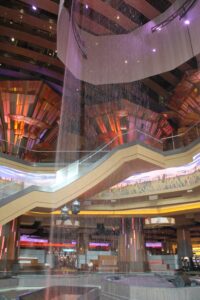 “We’ve very excited to unveil the new Grand Rotunda,” said Leeann Bridges, Harrah’s Cherokee VP of Marketing.  “There is nothing like it anywhere.  Guests will have a truly spectacular arrival experience.”

Synchronized video, audio, and lighting shows, with 15 different programs, will be featured at the Rotunda.

On the first level of the Rotunda, guests can access the casino floor, and from the second level , guests will be able to access the River Shops including Studio (ladies apparel and shoes), Gift’s Aplenty (gifts and home décor) and the Sweet Shop (candies and fudge).