The Cherokee Runners have had a busy couple of weeks.  In addition to speedwork, hill session and Couch to 5K, runners have been competing in area races.  Included were the 2012 Biltmore 15K and 5K in Asheville and the White Squirrel 10K and 5K in Brevard. 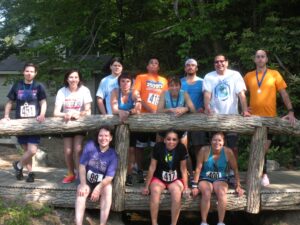 In addition to these races, Elnora Thompson competed in the Gorges Road and Trail 4.5-mile run on Saturday, May 19 in South Sapphire, NC.   No awards were given in this run, but Elnora had a great time.

Couch to 5K has completed its fourth week.  Trainees are committed to completing the 10-week training program that ends with the 4th of July Sunset 5K.   Each session begins with a warm up and cool down period and training is progressive with each week having longer durations of running.  Participants are encouraged to keep a daily dairy of their progress, what they eat and how they feel.

The Cherokee Runners meet twice a month, the 1st and the 15th in the Age Link Conference Room at 6:30pm.  Everyone is welcome to join, no matter the fitness level.  Walk or run your way to fun and fitness!