Friday was a homecoming. 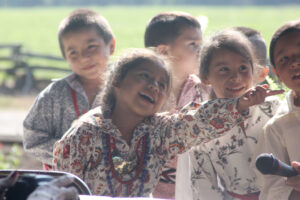 But, what is a homecoming….a true homecoming?  For the 26 EBCI tribal members who ventured to Tahlequah, Okla. and back on the Journey of Forgiveness, organized by the Healing and Wellness Coalition, coming home to Kituwah was the only way to heal ancient wounds.

A special homecoming event was held for the group at Kituwah on the morning of Friday, May 25.

“It’s about forgiveness,” said Amy Walker.  “I have been on my own personal journey of forgiveness for the past few years.”

She related that during a gathering of American Indians in Minnesota four years ago that she made the decision to forgive Andrew Jackson, the man responsible for the Cherokee Trail of Tears.  “My mom talked about him and taught us to hate him.  I carried that all of my life.  Just before I found out that I had cancer, I decided that I was no longer going to allow a dead man to have that much of my life.”

Walker said that releasing the negative energy changed her life.  “It was something that was a part of who I was for so many years.  I’m still letting go, and that was a big part of this journey as well.” 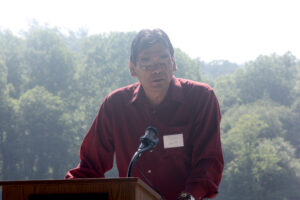 Tom Belt spoke during Friday's event of the cultural importance of Kituwah.

Patty Grant, Walker’s sister, is a member of the Healing and Wellness Coalition and is the program manager for the Analenisgi program.  She said a special stomp dance was held in their honor once the group made it to Oklahoma.

On the way home, they took the northern route of the Trail of Tears.  “We heard horrific stories about how our ancestors were treated and what they must have experienced in the harshest and coldest months of the winter.  And, we walked on the actual trail where our ancestors walked.”

Former Principal Chief Joyce Dugan spoke at Friday’s event about the events leading up Kituwah coming back into the possession of the Eastern Band of Cherokee Indians. 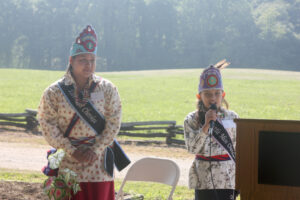 She told of a phone call in 1996 from the former owner of the property that contains Kituwah who said her family was interested in selling the property, then known as Ferguson Fields to most in the area, and that they would like to see the Tribe own it again.

“We didn’t need a purpose,” said Chief Dugan of the decision to purchase the land.  “It needed to be back in the hands of the Cherokee.  That was enough for me.”

She related that she suspected a fight when she brought in a resolution to Tribal Council to purchase the land with a price tag of $3.5 million.  But, Tribal Council agreed and passed the resolution and Kituwah would never be referred to as Ferguson Fields again.  It was the Mother Town again.

“I don’t think any of us knew the importance of it until we purchased it and started researching its history,” she said.  “It is a blessing to this Tribe to have it back in our hands.” 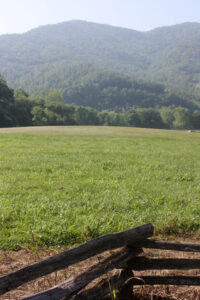 Kituwah - The Mother Town of the Cherokee

During Friday’s event, Peggy Hill presented a Certificate of Honor from the Healing and Wellness Coalition to the Brothers in the Wind motorcycle group for their assistance to the Coalition.  “These guys are special.  They ride in honor of our people.  They are a tremendous support in the community.”

Tom Belt, a citizen of the Cherokee Nation, a fluent Cherokee speaker and a teacher of the Cherokee language at Western Carolina University, spoke Friday about the cultural significance and importance of Kituwah.

He said Kituwah is the cultural center of Cherokee people.  “This is where we all began as Kituwah people.  We cannot know who we are if we do not know where we’re from.  This is our legacy, and this has been kept from us for a long time.”

Friday’s event was opened with the posting of the colors by the Steve Youngdeer American Legion Post 143.  It also featured a performance of songs in the Cherokee language by the Kituwah Academy Singers and welcome greetings from Little Miss Cherokee Deliah Esquivel and Teen Miss Cherokee Shakyra Bottchenbaugh.