RALEIGH – Gov. Bev Perdue and leaders of the Eastern Band of Cherokee Indians  signed an amended agreement on Wednesday, May 23 expected to create 400 new jobs in western North Carolina by expanding the Cherokee’s gaming enterprises. The 30-year compact will allow the Cherokee to offer live table gaming, and it will provide for the state to receive a share of revenue generated from these new games. The state’s share of the revenue from this agreement is directed to classroom education. 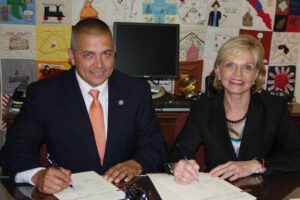 “This agreement is about creating jobs and growing the economy in western North Carolina,” Gov. Perdue said. “As an added benefit, it channels some additional resources to our classrooms. I look forward to working with the General Assembly to make sure this agreement is finalized.”

The General Assembly must pass accompanying legislation for the compact to become effective.

“The Eastern Band of Cherokee Indians is very pleased that this important milestone has been reached,” Principal Chief Michell Hicks said. “We would like to thank Gov. Perdue as well as leaders within the North Carolina General Assembly for their hard work on this important issue. Their leadership will help us continue to invest in the lives of the Cherokee people as well as the lives of the citizens of the state of North Carolina. However, more work must be done and we will continue to educate as many members of the North Carolina General Assembly to work towards passage of Senate Bill 582.”

The compact signed on Wednesday includes amendments to an agreement Gov. Perdue and the Cherokee reached in November. The changes include:

•         Specifying which types of live table gaming the Tribe can conduct, such as Blackjack and Roulette.

•         Limiting the Tribe to three casinos, including the existing one.

•         Expressing the hope of both the Governor and the Tribe that the fund will continue to be used for education in the future.

As with the earlier version of the compact, the Tribe will have exclusive live table gaming rights west of Interstate 26. The state’s share of revenue also remains the same:

•          4 percent of gross receipts from live table gaming during the first five years;

Once the General Assembly has acted, the compact will still require approval by the U.S. Department of the Interior.

– Office of the Governor