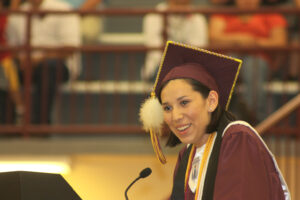 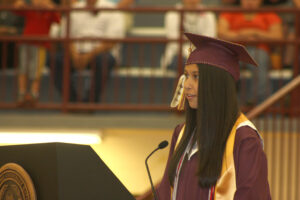 Reeves, Class of 2012 Salutatorian, said during her address, “This year will be impossible to forget.  Friday night football games were some of the best of our lives.”

She thanked her family, teachers, and friends and commented, “We’ve been through a lot together.”

Long, Class of 2012 Valedictorian, said, “This senior class is like no other.  I expect enormous accomplishments from this class.”

She also thanked her family and teachers, “You have set me up for enormous success in my upcoming endeavors.”

She encouraged the younger students, “Be yourself, make opportunities and most importantly, be fearless.”

During the commencement, several awards were given including the following:

Ray Kinsland, the “Voice of the Braves”, was the keynote speaker for the event.  “You are truly a wonderful group of young ladies and gentlemen.  Most schools represent a town or a community.  Our school represents an entire nation – the Eastern Band of Cherokee Nation.”

He told the students to appreciate the past and present and to have faith and serve the community, the Tribe and fellow man.

Kinsland alluded to this Class’ motto which comes from 1 Timothy 4:12, “Don’t let anyone think less of you because you are young.  Be an example to all believers in what you say, in the way you live, in your love, your faith, and your purity.”

He commented, “Thank you for choosing a motto that gives you everything you need.”

The Class of 2012 officers included: