River cane (Arundinaria gigantea) once covered around 10 million acres in the southern United States in the 1700s and 1800s.  It now covers an area less than 1 percent of that total according to David Cozzo of RTCAR (Revitalization of Traditional Cherokee Artisan Resources).

David Cozzo, RTCAR, speaks during the State of Cane Symposium on Tuesday, May 22 at the Birdtown Community Building. (SCOTT MCKIE B.P./One Feather photos)

Cozzo related that fact and many more about the intriguing plant at the State of Cane Symposium held on Tuesday, May 22 at the Birdtown Community Building.  Several presentations were given during the Symposium on the current state of river cane in the mountains.  A panel discussion, moderated by Beth Johnson of RTCAR, was held on cane restoration and preservation.  Other panelists included: Davy Arch, Oconaluftee Indian Village manager; Callie Moore, Hiwassee River Watershed Association executive director; Adam Griffith, Beachcare.org director; Roger Clapp, Watershed Association for the Tuckasegee River (WATR) executive director; and Buzz Williams, Chatooga Conservancy executive director.

“It is a southeastern plant,” said Cozzo.  “It’s where it does well.”

He related that river cane is the only North American species of bamboo.  In 2006, a second version of river cane (Arundinaria appachiana) was acknowledged by scientists, but was commonly known to mountain inhabitants as hill cane, arrow cane or switch cane. 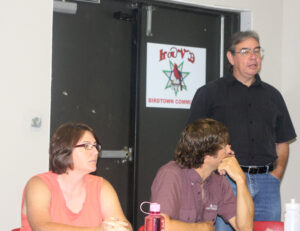 Cozzo said that RTCAR came out of a need for river cane for traditional Cherokee artists.  “The Cherokee tribe was down to two double-weave basketmakers.  There was a concern about resources.”

Arch said that he believes there are currently around 10 Eastern Band Cherokee basketmakers who frequently make double-weave river cane baskets and about 40 more that know how and make them occasionally.

“I am very optimistic that we have saved the art.”

Arch said that 10,000 year old impressions of river cane mats were found in clay in the area where the new Cherokee Central Schools now sits.  “Cane basketry is one of our oldest traditions.”

He did say that having resources of river cane is very important to the future of the art.  “At the Village, we use a lot of cane.  It’s amazing the amount of cane it takes to make a basket.”

Moore said the Hiwassee River Watershed Association has been working to identify river cane canebrakes in Cherokee and Clay counties.  So far, 15 has been identified and the landowners for six of the canebrakes have signed agreements to preserve them and allow sustainable harvesting.