Live table games are one step closer to reality at Harrah’s Cherokee Casino & Hotel.  The North Carolina Senate approved a bill on Wednesday, May 16 that would approve the amended gaming compact between the Eastern Band of Cherokee Indians and Gov. Bev Perdue that would allow live dealers.   The measure passed the Senate by a vote of 33-14. 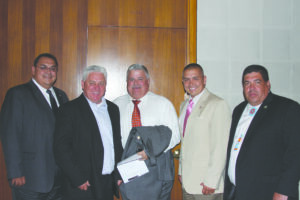 Principal Chief Michell Hicks said he was very pleased with the outcome.  “I’m happy with the ways things went.  I think we’re moving in the right direction.”  He said it will probably be a few weeks before the NC House takes up the bill.

Big Cove Rep. Bo Taylor said in a statement, “We were pleased to say after a long day of lobbying that the Senate passed our Class III compact with a vote of 33 to 14.  We are now faced with a tough challenge as we must pass the vote through the NC House of Representatives.”

State Sen. Jim Davis (R-Macon) commented, “This compact replaces computers with jobs for western North Carolinians.  The Cherokee Nation is a responsible steward of gaming revenues, and this agreement is an excellent way to help provide education funding and jobs for our state.”