Last month, town workers sprayed herbicide on Nikwasi Mound in the Town of Franklin leaving dead, brown grass.  The Eastern Band of Cherokee Indians was not consulted about the situation and has yet to receive an official apology. 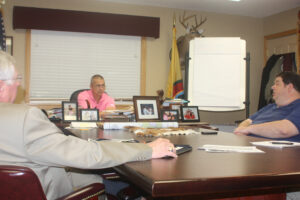 “I find out through general conversation that this has taken place without any notification,” Principal Chief Michell Hicks said during an informal meeting on the mound on Monday, May 21 in his office.  Chief Hicks met with Franklin Town Alderman Bob Scott; Bill Evans who served on the now-defunct Franklin Mound Committee; Cherokee County/Snowbird Rep. Diamond Brown, Jr.; Russell Townsend, EBCI THPO officer; and T.J. Holland, EBCI cultural resources supervisor.

“We have worked on various things over the years and I thought we had good relationships,” said Chief Hicks.  “But, this just goes to show me that either someone slipped and wasn’t thinking or maybe those relationships weren’t there.”

Alderman Scott, who served on the now-defunct Franklin Mound Committee, said he was surprised to see what was done to the mound as well.  “I found out about it when I drove by one day and saw that the mound was brown.  We share some frustrations over what happened to the mound.” 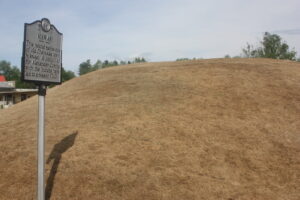 Townsend related at the meeting that a total of 63 mounds have been identified in western North Carolina and only four of those are currently owned by the Tribe.  Chief Hicks said that it would be his wish for the Tribe to purchase Nikwasi Mound so that the care and maintenance can be performed by the Tribe itself.

Scott said he would like to see a Commission formed with EBCI tribal members and members of the original Mound Committee.  “I want to see what we can do to solve this problem together.  I think we have a lot of common ground.  We just had a bad incident.”

Chief Hicks responded, “I would rather own the mound and let us take care of it.  That would be my preference because I know that we’ll do the right thing.”

“The right thing to do, just like Kituwah, just like Cowee, is to bring it back into the hands of its original owners.”

At the end of the meeting, Evans stated, “Chief, I want to say I’m very sorry that it happened.”

Nikwasi Mound was put on the National Register of Historic Places on Nov. 26, 1980.  It is listed on the Register as Nequasee.