The walkers of the Leonard Peltier Walk for Human Rights came to town on Monday, May 10.  Upon their arrival, they walked from the welcome sign near the Park entrance to the Cherokee Indian Fair Grounds.  The walkers were accompanied by members of the Eastern Band of Cherokee Indians including the Rattlesnake Mountain drum group who sang for the walkers as they marched down Tsali Boulevard. 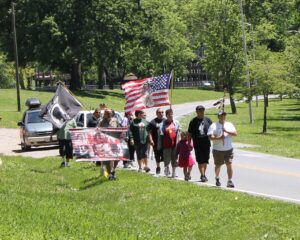 That evening, they were treated to a potluck dinner at Barry Craig’s Campground by members of the community where they showed the movie, Incident at Oglala, as well as shared stories of their travels and their cause.  On Saturday, May 12, Bill Miller held a free concert at the Fairgrounds to help raise donations.  The walkers, led by organizer Dorothy Ninham, departed Cherokee on their way to their ultimate destination of Washington D.C. in which they are set to arrive on Friday, May 18.  There is also a three-day powwow scheduled once they arrive

The walk, which started in Alcatraz, Cali., was organized, according to the walk’s website, to “raise awareness of the many human rights violations that occur every day to all four races of mankind.  Although one main thrust of the walk is to reignite Leonard Peltier’s case and show how life on Indian Reservations is…the walk is also about how these injustices are not limited to the indigenous people of this land.  Leonard supports the creation of awareness and education regarding the violations that occur to the people of America and of all Native Tribes.”

Leonard Peltier is an Anishinabe/Lakota man, originally from the Turtle Mountain Indian Reservation in North Dakota, who was convicted of killing two FBI agents in 1977 in which he was ultimately sentenced to two consecutive life sentences.  To date, he has already served over 35 years of his sentence.  Peltier is scheduled for a mandatory release date of 2040 in which he will have served 65 years.  He is considered a political prisoner by his supporters and the plea for his clemency has been made by many including Amnesty International, Archbishop Desmond Tutu and the National Association of Criminal Defense Lawyers.

For more photos of the walk, please visit the One Feather photo gallery at: