MARYVILLE, Tenn. – Hannah Youngdeer, an EBCI tribal member and 2011 Cherokee High School graduate, is making quite a name for herself at Maryville College.  The freshman member of the Maryville Scots softball team has been named to the Great South Athletic Conference (GSAC) All-Conference team as an outfielder and named to the GSAC All-Freshman team. 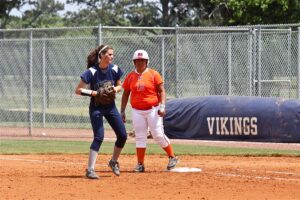 In addition, Youngdeer received the Most Valuable Offensive Player award for the Scots.

According to GSAC statistics, Youngdeer finished the season with a .391 batting average and scored eight runs, had 43 hits, nine doubles, two  triples and 23 RBIs.  Her slugging percentage was .509.

For the 2012 season, Maryville went 10-6 in the conference and 16-23 overall.  They finished third in the regular season conference standings and were the runner-up in the conference tournament losing in the championship game to Huntingdon 7-2.