Town workers sprayed herbicde on Nikwasi Mound in the Town of Franklin leaving dead, brown grass as shown in this photo taken on Saturday, May 5. (SCOTT MCKIE B.P./One Feather)

FRANKLIN –  Town workers sprayed herbicde on Nikwasi Mound in the Town of Franklin leaving dead, brown grass.  Many have asked why.

“I feel that we owe the Tribe an apology,” said Franklin Town Alderman Bob Scott.  “In my opinion, what happened was a mistake.”

Scott, who serves on the Mound Committee for the Town of Franklin, commented, “The mowing itself was not really good for the mound.  What we were talking about doing was letting it grow up naturally except for right around the base of the mound.” 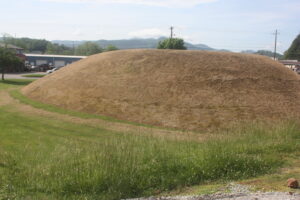 This photo shows the back side of the mound.

He said the plan was to let the mound revert back to a natural growth cycle, but a miscommunication resulted in herbicide being sprayed on the mound.

Scott said, in the long run, he’d like to see the land around the mound purchased by the Town of Franklin or the Tribe or both to make a historical area complete with a full interpretative area.  “I just want to see that mound preserved.  Rest assured, no one is going to destroy that mound.  That is the most historic thing in the town of Franklin.”

Russell Townsend, Tribal Historic Preservation Officer for the Eastern Band of Cherokee Indians, related, “In most cases, cultural resource laws apply to those situations that involve federal land, federal money or a federal permit, and, in this case, it appears that none of that was required.  So, there was no violation of the National Historic Preservation Act.”

He said the Tribe is looking into the use of herbicide in such close proximity to the Little Tennessee River.

“This is one of those situations where we have sites that are important to us all over the old Cherokee world in portions of eight states, and we don’t own them in many cases,” said Townsend.  “They are owned by states, counties and cities.”

He said most governments work very well with the Tribe in instances involving historic and sacred sites.  One recent example he gave is the Spikebuck Mound located near Hayesville.  “That county works very closely with us.  That’s a really good working relationship.”

Townsend said the relationship with Macon County has never been that strong, and that the county has fought the Tribe on several issues including the recent expansion project at the Macon County Airport.  “We just don’t have a good cultural resource record with Macon County.”

He did relate that he feels the current course of action is the way to go, “I think Chief Hicks is taking the appropriate action by letting them know how displeased we are and working towards an amicable agreement.  It would be great if Macon County would recognize that they are stewards of the site.”

Franklin Mayor Joe Collins related, “In order to reduce the maintenance needs, i.e., mowing of the Indian Mound, and to lessen the negative impact on the mound caused by foot traffic and the smoke and waste from mower engines, the Town of Franklin decided to replace the existing grass on the mound with a strain of grass-type ground cover which requires much less maintenance.  Additionally, the Town Board has directed its attorney to draft an ordinance to prohibit unauthorized activity upon the mound, all for the purpose of preserving the mound from future deterioration.”

He went on to state, “The Indian Mound is a treasured asset of the Town of Franklin, and the Town Board will continue to safeguard its future.”

Nikwasi Mound was put on the National Register of Historic Place on Nov. 26, 1980.  It is listed on the Register as Nequasee.