Landon French turned 18 on Tuesday, May 8.  Just four days after, he will enter the ring for his mixed martial arts (MMA) debut.

French, an EBCI tribal member and senior honor student at Smokey Mountain High School, is set to fight Caleb Love at the Rock at the Dock 5 event in Mooresville on Saturday, May 12.

“I got into MMA mainly to do something different other than a team sport,” said French who started training at age 15 with Clyde Dull at the Birdtown Recreation Center.  “I like having to push yourself to get better at it.  That’s what I mainly look for – seeing what I need to improve on, improve on it and seeing what else is next to improve on.”

In order to increase his MMA skills set, he has been studying Brazilian jui jitsu for a year and a half at Basulto Brazilian Jui Jitsu school in Waynesville and has earned a white belt with 2nd stripe.

Although his kicks make bags cower in fear, he categorizes himself as a grappler.  And, for good reason.  He has entered five grappling tournaments in the last year, four in the North American Grappling Association (NAGA), and has brought home quite a collection of hardware including one championship belt, five championship swords, two first place medals and one second place medal.

Since MMA is a sport that combines many different fighting styles, French looks up to a variety of martial artists and fighters including: Muhammad Ali, Bruce Lee, Dan Hornbuckle, Dan Henderson, Minotauro Nogueira, and Manny Pacquiao. 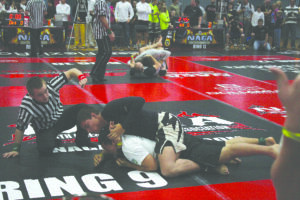 Landon French (top in black shirt) cranks a choke hold on an opponent at the North American Grappling Tournament (NAGA) in Gallatin, Tenn. on Saturday, Nov. 12, 2011.

For right now, French’s goals in MMA are about improving, “It’s just a sport right now.  I haven’t really thought about going pro yet.”

French is visualizing a win at his debut fight.  “I’m excited about it.  I’ve thought about it every day for the past three weeks

And, his family is excited too.

French is the son of Dawn Arneach and the late Daniel French and resides in the Yellowhill Community.

“I’ve been really excited about his training, and once we found out that he was set up for a fight, it’s been driving me nuts,” Arneach jokes.  “We’ve been waiting for three years.  We joked about it when he first started training with Clyde that he’d start fighting when he turns 18.  Well, it’s here now and it’s really exciting.”

When asked what his goals are for MMA, the soft-spoken French related, “to get more mean.”

For information on tickets to Saturday’s fights, contact Matt (704) 464-1374 or visit www.therockmma.com.