Marvel Welch, an EBCI tribal member, was sworn-in as the representative for the Eastern Band of Cherokee Indians on the North Carolina Commission of Indian Affairs during the regular Tribal Council meeting on Thursday, May 3.  She took the oath of office from Cherokee Tribal Court Judge Kirk Saunooke. 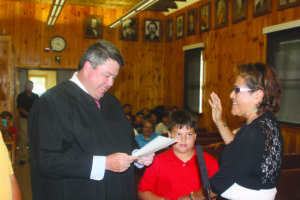 Cherokee Tribal Court Judge Kirk Saunooke (left) administers the oath of office to Marvel Welch (right) as she is sworn-in as a member of the North Carolina Commission of Indian Affairs on Thursday, May 3 as her grandson Eli Lanning holds the Bible. (SCOTT MCKIE B.P./One Feather)

“I look forward to the challenge of being an advocate because I’m a stakeholder in this community,” said Welch.  “Working collaboratively with other members across the state is going to help us to build what we need to be building here in programming.”

Welch holds a Masters of Social Work degree from the University of Tennessee – Knoxville and related that she is currently working on her Ph.D. in community promotions and health.   She is currently a full-time Ph.D. student.  She previously worked as  a counselor at the Analenisgi program and serves on the board for The Center for Native Health.

“It really is an honor,” said Painttown Rep. Tommye Saunooke.  “I’m so happy for you and I know you’ll do a good job.”

Big Cove Rep. Perry Shell commented, “We need that voice there, and I’m glad you’ll be there.”

The Eastern Band of Cherokee Indians is given two spots on the Commission.   The Tribe has had a vacant spot for years which Welch will fill.  Patrick Lambert is the other EBCI representative to the Commission.  He was originally appointed in May 2003 and his current term is set to end on June 30.