The Oconaluftee Island Lighting Project has been completed and will help save energy and money for the Eastern Band of Cherokee Indians for years to come. 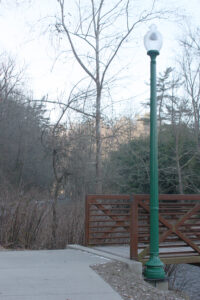 As a result of the recently completed Island Park Efficiency Lighting Retrofit Project, all pole mount lighting units have been changed from metal halide to LED. (Photos by Scott McKie B.P./One Feather)

“Part of the Strategic Energy Committee’s mission is to implement energy efficiency and renewable energy projects to reduce the Tribe’s energy expenditures,” said Damon Lambert, EBCI Building Construction manager who also chairs the Energy Committee.  “This project accomplished that goal while also providing an educational component for visitors and residents alike to make energy saving decisions in their own lives.”

The project was accomplished through a grant from the Cherokee Preservation Foundation.

According to Lambert, the following have been accomplished as a result of the Retrofit Project:

– All pole mount light globes have been replaced

– Electrical panels have been replaced with a Milbank

– All lighting within the gazebos has been replaced with LED units

– Timers placed on lighting at the outdoor market area 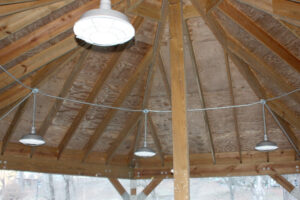 All lighting within the gazebos at the Island Park has been replaced with LED units .

“Through Cherokee Preservation Foundation’s Generations Qualla initiative, we make energy efficiency and conservation-oriented grants that enable the Tribe and other grantees to strike a balance between natural, cultural and economic needs,” said Susan Jenkins, CPF executive director.  “We supported the Island Park Efficiency Lighting Retrofit Project because it meant the Tribe would be able to replace older types of lights on the Island with much more efficient LED lights.  Through its use of LED lighting, at Oconaluftee Island Park and in the new streetlights throughout downtown, the Tribe is demonstrating great leadership.”

According to information from CPF, the Christmas holiday lights displayed in Cherokee were also switched to LED lights which use only one watt of energy – down from the seven used by the previous lights.  CPF expects the savings to be around $5,800 yearly. 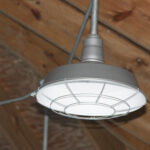 According to energystar.gov, LED (light-emitting diode) lights are described as “small light sources that become illuminated by the movement of electrons through a semiconductor material.”