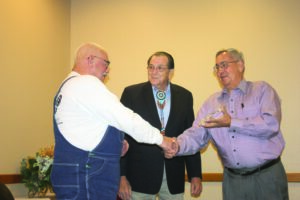 Kinsland said that Lambert, who was born and raised in Cherokee, is an avid gardener and has plowed many people’s gardens in exchange for them donating money to the Children’s Home.

So passionate about his philanthropic work, Lambert donated all of the monies he earned in prize money at this year’s Cherokee Indian Fair to the Home.  And, that was a lot as he won 19 awards on 18 exhibits, and he does this every year. 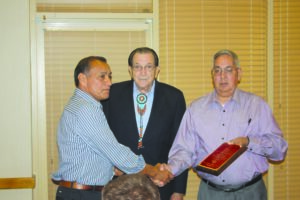 Paul (right) presents an Appreciation plaque to Noah Wolfe (left) who was recognized for his retirement on Wednesday.

Also on the agenda for the luncheon was the official retirement of long-time bus driver Noah Wolfe.

“I really appreciate all of the work he has done and all the help he has given me,” said Tommy Lambert, Cherokee Boys Club general manager.

Kinsland spoke briefly on Wolfe’s achievements during his career, which began in 1974, including winning the 2 Million Mile Award from the National Safety Council and winning the Western Region (NC) Bus Roadeo for nine years.  Wolfe also competed in the International School Bus Roadeo in New York City and finished in the top third of all drivers.

“It’s an honor that I get to honor Noah,” said Kinsland, “But, at the same time, it’s sad to see him reitiring.  The bottom line is he has made it safer for thousands of Cherokee children on the buses over the years.”