By DAWN ARNEACH
ONE FEATHER STAFF
“Honoring the Past, Embracing the Future” is not just a saying, but what is happening with the Jackson County Library and its move to the Old Jackson County Courthouse. 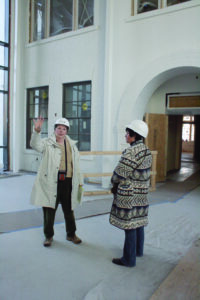 Cates talked about the different aesthetics that are being used to bring the buildings up to date as well as keeping a look that is from when the courthouse was first built.

He spoke about the Terrazo flooring, reclaimed pine for the newel posts, and the English Chestnut Stain.  He also talked about the Skylight for the three Horizontal stained glass sections which are to be set in place around Dec. 20.

The main showcase will be the community room with auditorium seating, electric drapes and projector system. It will have aisle lighting, and the seating will be wood-back wrought iron arms, but with a more modern cushioning. The best feature in the room will be the coffered ceiling beams. Another use of old to new is the replication of the fret work on the cupola that is used in the design for the railings running outside the buildings. An added feature to the outside is the second floor balcony, called the Juliet balcony.

Handicap access is possible to all public places, and an elevator will help  wheelchairs get to the second floor and the doors are all the appropriate width.

Display cabinets are set throughout the buildings, but are recessed and illuminated. In the works already is a traveling display from the Smithsonian for June 2011. Another area for recognition will be in the main foyer where a recognition board listing the names of those that have made donations to the Jackson County Library will be featured.

The genealogy room will hold collection, books, maps and family trees.
New ideas for the library include: implementing technology throughout, a self check in and out that will scan the library card and the book, a children’s area with computers that are age appropriate as well as a story-time room, a tutoring room, plus a group study room for home school families.

For the past three years, Jackson County Library and Friends of the Library have been helping to raise funding for this move. The library also received matching funds from the Bill and Linda Gates Foundation for computers.