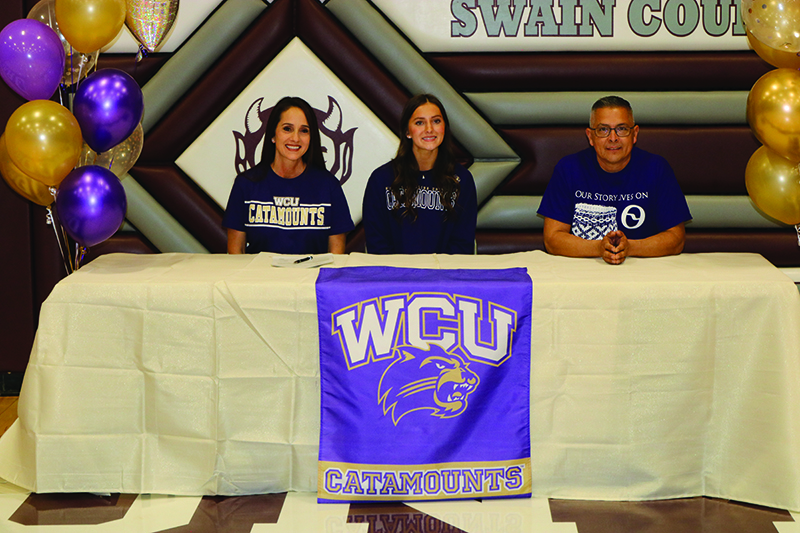 Amaya Hicks, center, a member of the Eastern Band of Cherokee Indians (EBCI), signed a letter of intent to run at Western Carolina University during a ceremony held at Swain Co. High School on the afternoon of Thursday, Jan. 19. She is shown with her parents including former EBCI First Lady Marsha Hicks, left, and former EBCI Principal Chief Michell Hicks. (SCOTT MCKIE B.P./One Feather photos)

BRYSON CITY, N.C. – Amaya Hicks, a member of the Eastern Band of Cherokee Indians (EBCI), will continue her running career at the next level at Western Carolina University (WCU).  The six-time NCHSAA (North Carolina High School Athletic Association) state champion signed a letter of intent during a ceremony held at Swain Co. High School on the afternoon of Thursday, Jan. 19.

“I’m just really grateful and thankful for everybody who’s supported me along the way to get me here,” said Amaya who will be doing cross country as well as indoor and outdoor track for WCU.  “I’d like to thank my friends and family, my coaches, and Jesse Norman, Western’s coach for allowing me this opportunity.” 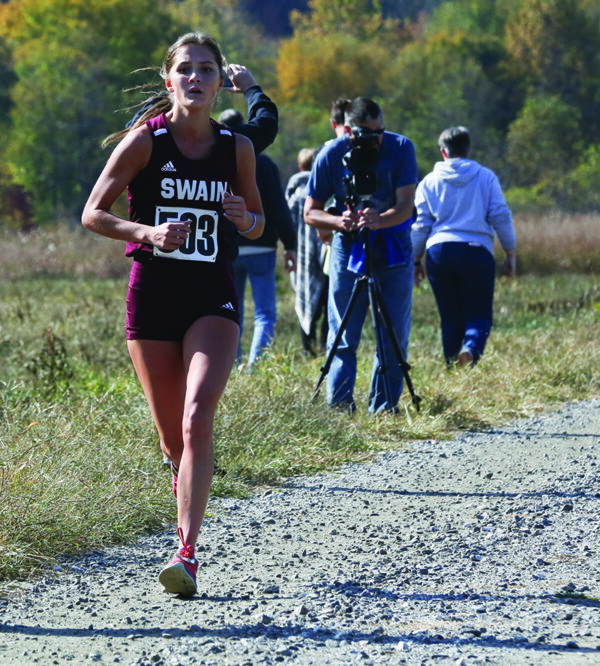 When asked how long she’s been dreaming of running in college, she noted, “Honestly, not up until this past year. My whole entire life I’ve grown up thinking that I was going to go play collegiate basketball, but then it (running) just fell into my hands.”

She does have a favorite event.  “The 800 is my main event.  That’s honestly just been the main event that I’ve always run. This season I think I’m more excited to try longer distances and see how I do with those as well.”

In addition, she is also the holder of two Swain Co. High School records including the 4x400M Relay and the 4x800M Relay.  Amaya has been named to the Smoky Mountain All-Conference team 11 times (nine for track & field and two for cross country), and she has been a part of five Smoky Mountain Conference team championships.  She has been named All-State and All-Regional (1A West) seven times each, was the 2022 Farm Bureau Sportsmanship Winner at the NCHSAA 1A Cross Cross State Championship, and is a nominee for the High School Heisman Scholarship.

Keith Payne, Swain Co. head cross country coach, commented, “I really don’t know if my words can express just how much Amaya brings to our running program and Swain County High School as a whole. When I first got here four years ago when she was a freshman, I heard about this Amaya Hicks girl and thought, ‘who is she?’.  COVID hit and I didn’t see her in the spring of 2021, but when she came on board in track that next year it was just like lights out.”

He spoke of her importance to their team.  “The common denominator in all of our state championships is this runner right here. She’s been our captain for cross country. She’s a true testament of what hard work and perseverance means. Coming from last year to her first full year in cross country to this year as captain and number two in the state, and now signing a letter of intent to a Division I college…we’re so proud. I’m just honored to be a part of your journey. Thank you for letting me be a part of that.”

Ian Roper, Swain Co. head track & field coach, said, “Amaya is the type of kid that makes the program. She’s also a kid that makes other kids better. She’s a leader and she pulls everybody up with her. Without her, I don’t know that we’d have any of these pictures on the wall.”

Neil Blankenship, Swain Co. High School athletic director, said, “You don’t’ get here by yourself. It takes a lot of other people to get you to this point. Her family, her coaches, her teachers, her teammates – all these people take part in this journey, and they will continue to take part in this journey as she goes onto the next step. We will be there for you as you’re on to this next step.”

Amaya’s parents are thrilled of their daughter’s accomplishments.  Her father, former EBCI Principal Chief Michell Hicks, said, “I just want to thank all the coaching staff for all the hard work, all the students. Anybody that has a dream can take this next step.”

He added, “One of the things I will say about Amaya is that from a child she was a very determined kid. Sometimes stubborn…some of you coaches may have seen that a little bit. I really think that she’s turned out to be a great leader, not only on behalf of her teams but her school and also her nation – the Cherokee Nation. I’m just really proud of what she’s been able to accomplish. This has been a tough journey.”

“I’m just really proud of her putting the work in and being diligent about making her decision.”

Amaya’s mother, former EBCI First Lady Marsha Hicks commented, “To be a part of her journey is humbling from my perspective. To see how hard she’s worked since she was a little girl to be able to earn what she has earned to this point and then feel confident in that and where she’s going to go and spend the next four years. It’s very rewarding from my perspective. I’m excited to be a part of that.”