CHEROKEE, N.C. – The Birdtown Gym has been re-named for a person synonymous with basketball in the Cherokee community.  The building will now be known as the Peaches Squirrell Sports and Recreation Complex.

During its Budget Council session on the morning of Tuesday, Jan. 10, Tribal Council passed Res. No. 473 (2023), submitted by Kamiyo Lanning, Cherokee Recreation Program recreation manager, by a unanimous vote. 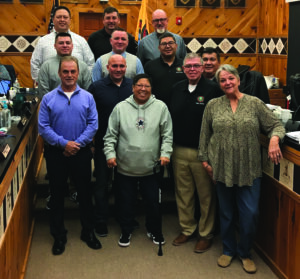 “I want to say thank you,” Squirrell said following the vote.  “It’s such as honor.  I love everybody in this community – my mentors before and all of my supporters. Thank you.”

Res. No. 473 states, “Mianna ‘Peaches’ Squirrell has been an employee of the Eastern Band of Cherokee Indians for over 20 years serving the community in the (Cherokee) Recreation Program.  She has held positions in the Cherokee Recreation Program as a recreation aide, recreation supervisor, youth sports coordinator; and Peaches has served on the NASA (Native American Sports Association) and NAYO (Native American Youth Organization) Board for over 10 years and is currently serving as the NAYO president.”

During discussion on the legislation, Lanning told Council, “We appreciate you giving us the opportunity to change a resolution to honor people while they’re alive by re-naming buildings. More often than not, we almost lose people and then you realize how much you appreciate them, how much they impact the lives of the people in their community and the people around them.”

She added, “I’ve only worked with her for four and a half years, and I’ve seen the impact that Peaches has on the community, has on us and Recreation, and it’s something that she will continue to do…she will do anything she can for anybody without ever asking for a ‘thank you’, never expecting it.” 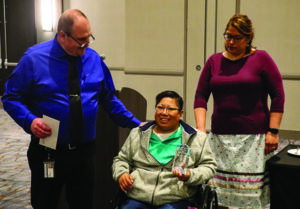 Janelle Rattler, Cherokee Recreation recreation aide and Senior Games coordinator, commented on Squirrell, “It’s been a pleasure to not only call her a co-worker but as a friend and a sister.  And, I think it’s well-deserved for Peach.”

Vice Chief Alan B. Ensley commented, “I want to congratulate Peach.  She was an outstanding athlete at Cherokee, and this is a great example of what you can do if you take your athletic ability throughout high school, go on and get your education, and come back and help your people.”

Tribal Council Chairman Richard French spoke to this and noted, “This is the third one we’ve done, and the names still haven’t been put up on the other two.  We pass resolutions in here and then, as Miss Tommye (Saunooke) used to say, ‘it sits over there and collects dust’.  These honors are for people that did something for the youth in the community – Pam, Kool-Aide, Peach – and I think it needs to be carried out asap to put these names on these three gyms for what these people have done for our communities.”