CHEROKEE, N.C. – Lloyd Carl Owle, an elder of the Eastern Band of Cherokee Indians, received the coveted Frell Owl Award on the afternoon of Wednesday, Dec. 14 during a ceremony held at Harrah’s Cherokee Casino Resort Convention Center.  An artist, educator, former Tribal Council representative for the Birdtown Community, and more, Owle received the award for his years of dedicated service to Cherokee youth and families. 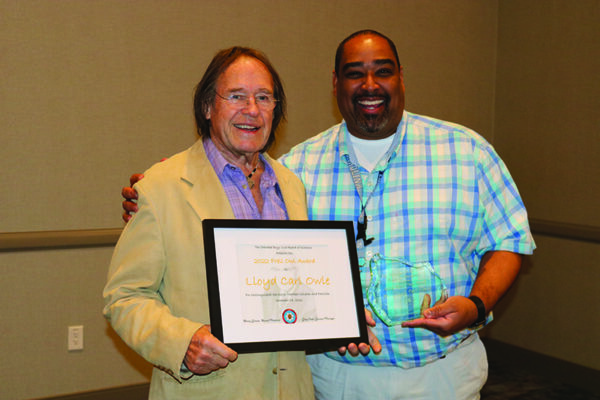 “The Frell Owl Award is given to those who best exemplify the character and accomplishments of the late Mr. Frell Owl and to those who have significantly contributed to the welfare of the Cherokee children and families,” Benny Graves, Cherokee Boys Club Board president, said during the honoring for Owle.

Graves noted, “I’m getting chills right now. I’ve known that he was the winner, but this is one of the nicest people that I’ve ever met around here. And, of course, he’s passed it onto his son. Super, super guy.”

He spoke of Owle’s life and accomplishments including starting at the Cherokee Boys Club when it was still the Cherokee Farm Club.  There, Owle was a bus driver and a vocational training leader in automotive, carpentry, and agriculture.  Later, he worked for the UNITY youth treatment center in Cherokee for 18 years as a cultural intervention specialist.  Owle was the area coordinator for the Save the Children Program and became the Southeast Indian Nations director for Save the Children.

Graves added, “He exemplifies everything that this award stands for. When I first met him, I felt as if I had known him for all of my life. That’s just the kind of man he is.”

Owle said he was happy to be chosen for the award and joked, “I’ve always enjoyed working with people and running my mouth.”

“I served as a teacher between the Boys Club and the school teaching them about mechanics.  We had a lot of really wonderful people working there.  It was really good working with them, and I enjoyed becoming president of the Boys Club.”

He further stated, “I really enjoyed working with youth and ended up doing that most of my time…thank you for this award.  I appreciate all of you.”