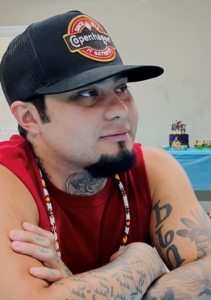 Kobe Gavin Toineeta, 25, of the Birdtown Community, entered his eternal home on Friday, Nov. 11, 2022. Kobe was a 2015 graduate of Swain County High School and will forever be remembered as an old soul who never met a stranger.

From a young age, Kobe was a well-rounded athlete and excelled in all sports. He loved baseball, golf, and was an outstanding basketball player receiving the MVP award for the Maroon Devils JV basketball team. He excelled in football and that’s where his heart was.  He was one of the most aggressive players on the field. Kobe received MVP on the Cherokee Braves JV football team and All Conference his junior year on the Swain Maroon Devils football team.

Kobe had a deep passion for his Plott hounds and bear hunting. He loved his community and gave back by giving elders fish and bear meat, making sure no one went hungry. He was a member of The Regulators Hunting Club. Kobe was hired on by Scott Welch at the young age of 19; and quickly became skilled in the drywall industry, becoming a partner with Scott.

Kobe is preceded in death by his great grandparents, JD and Mary Lambert, Bob and Helen Owle, and Joshua and Frances Toineeta; and uncles, Will and Rick Lambert.

Services will be held Friday, Nov. 18 beginning at 5 p.m. at Bethabara Baptist Church where he will remain until the hour of service on Saturday, Nov. 19 at 2 p.m. Mr. Foreman Bradley and Mr. James “Bear” Lambert will officiate.