The Cherokee Central Schools (CCS) Board of Education met with several guests on Monday, Nov. 7 and covered a number of subjects.

One of the extended topics of discussion was with Cherokee Indian Police Dept. (CIPD) Assistant Chief of Police Josh Taylor, who stepped into that new role last week. Taylor was in attendance to push for revamping policies surrounding the student resource officers (SROs) at CCS, as well as advocating for providing Narcan to CCS.

“It’s time to update policies and procedures with our SROs. It’s time to start pushing training out where we can actually move from one building to another building and have officers and school staff alike that are educated in what’s going on,” said Taylor. 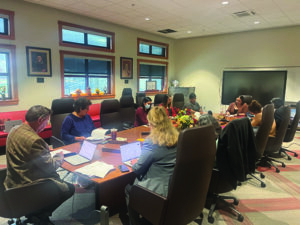 The Cherokee Central Schools (CCS) Board of Education met with several guests on Monday, Nov. 7 and covered a number of subjects. (JONAH LOSSIAH/One Feather photo)

Taylor said that he wanted to do whatever he could to prepare the school. He said that this was a timely issue and didn’t want to be talking about the same issues this time next year.

“I think if I can dedicate, if we can dedicate time together, I would love to start getting to where we can meet once a week and get it hammered out to where we have something to go off. [Board attorney Ashley Leonard] would be great to have in the room. Because she knows what we can and can’t do.”

Another particular issue that Taylor was very passionate about in the meeting was increasing the availability of Narcan throughout the Qualla Boundary, including at CCS. He said that this is about safety for both students and staff.

“Take this piece of paper here. Say little Bobby’s got his homework. Big Bobby’s a heroin addict, which we know kids live with. Next thing you know, heroin’s not working anymore so he’s turned to fentanyl. He’s higher than a kite, then he stashes it somewhere because someone comes in their room. Puts it in little Bobby’s backpack. I pull out his homework, a white powdery substance is on it. I dust it off, I don’t know what it is. I’m not thinking about dope. Next thing you know, I’ve inhaled it. I drop out because my body is not going to take it. One Narcan would save my life,” said Taylor.

This concept sparked an extended conversation with the Board. One member that was particularly vocal was co-Vice Chairperson Tara Reed-Cooper

“If I’m a parent, I’m not hearing any of this except for what I’m reading in the paper. As a parent, when I first seen it, I’m sitting on the fence of it. Because we’re putting it in the reach of the kids, so is that telling the kids it’s ok to do it? That it’s ok to bring it to school? I didn’t think about the side that you’re talking about. That’s great education, but I think that we need to take that further than just educating the School Board. I think we need to educate the community of why we’re doing it,” said Reed-Cooper.

The Board also invited EBCI Secretary of Treasury Cory Blankenship to the meeting to follow up on discussions involving the CCS Reserve Fund that is currently managed by the EBCI Investment Committee. He was invited following the School Board’s conversation with Polly Kelley, who was pushing to make the CCS Reserve Fund more active. The Board wanted to hear what Blankenship saw as the best options for proceeding.

“I think probably the more practical thing to do, though, is once you’ve finished with that year’s audit and you have an idea as to where you stand on the financial statements. In terms of ‘we allocated this much, we actually only spent this much’ so now we have this fund balance sitting out there, let’s deposit that into that account and let that grow. I would say it’s not even something when you’re laying out your budget that you have to think about. It’s at the end of the year,” said Blankenship.

Also in this discussion were Ashford Smith, Cherokee Boys Club finance director, and Howard Wahnetah, CCS finance director. Wahnetah provided the School Board’s finance report. Smith said that the school’s budget report was delayed following Tribal Council passing the 1.4-million-dollar budget increase. He said that they were implementing the salary increases and that they were hoping to have the first checks to employees out as soon as possible.

The Board also wanted to speak with Secretary Blankenship about the water damage at the school. The final cost of the water damage has not been confirmed, but the Board and Superintendent Murray hinted at a significant bill.

“We’re going to have to start [repairs]. So, we’re probably going to have another resolution put in to say ‘hey, we at least have to start somewhere’. The longer we let it sit, possibly the worse it’s going to get. While our legal side is working on things to try to get some of it recouped, so far, we’ve kind of hit dead ends with litigation and other types of things so far,” said Chairperson Thompson.

Secretary Blankenship stated that the Tribe had set aside $5 million of the ARP funding for the water intrusion damage at the school, but the Board suggested that would not be close to the final total. He said that there might also be chances to get financial assistance through other agencies or grant funding, as well.

The final business handled in open session was reviewing some of the policy amendments that had been presented by Campbell Shatley, PLLC. There were a few changes needed following notes from the Board, but many of the policies were approved.

The School Board then moved into a closed session for the remainder of the meeting.

Earlier in the meeting, the consent agenda was passed unanimously and put forth the following:

The next meeting of the CCS Board of Education is set for Monday, Nov. 21 at 4:45 p.m. Meetings are being held in the Administrative Offices at Cherokee Central Schools. These meetings are open to the public unless there is a call for an executive session.