CHEROKEE, N.C. – Butch and Louise Goings, both elders of the Eastern Band of Cherokee Indians, will receive the North Carolina Arts Council Heritage Award on Wednesday, May 31, 2023.  The couple are both noted Cherokee craftspeople with Butch known for his wood and soapstone carving and Louise known for her white oak basket making. 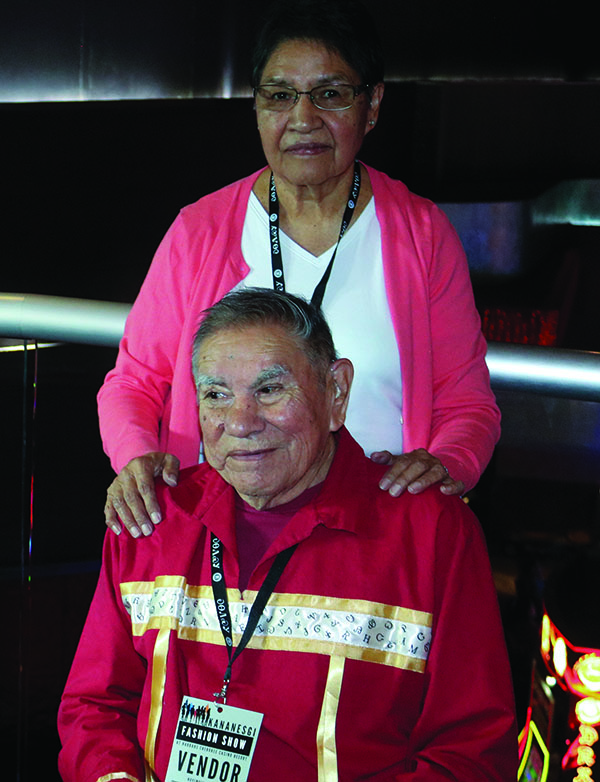 Louise and Butch Goings, elders of the Eastern Band of Cherokee Indians, are shown at the Kananesgi Art Market and Show at Harrah’s Cherokee Casino Resort on Saturday, Nov. 5. Both are set to receive the North Carolina Arts Council Heritage Award in May 2023. (SCOTT MCKIE B.P./One Feather photos)

Louise, who follows in the footsteps of her late mother, Emma Taylor, who won the award in 1989, commented, “Many years ago when my mom won that award, I thought to myself, ‘I will never be able to be that good in the community and be able to be in it’. Then when they called me and told me that I had won it, I said, ‘I never thought I’d be walking in my mom’s footsteps’. It was just a big, big, big thing for me.”

“I just think it’s really a big honor. It’s not all about my basketmaking, it’s about my community work. I go out and I attend different events and I donate stuff, and I do Cultural Summer School besides enjoying my art.”

When making the announcement recently, Gov. Cooper commented in a statement, “North Carolina’s traditional arts continue to reflect a unique sense of place and lived experiences of our diverse people.  I congratulate the 2023 recipients of the Heritage Award for their individual artistic accomplishments and for their commitments to the cultural life of our communities, small and large, rural and urban.”

On being named a recipient, Butch noted, “We talked with the lady that told us the news and, man, I couldn’t believe it. I know a lot of the people from Cherokee that have won that award since then, went to school with some of the guys that won it, and did carving under Amanda Crowe. She was my woodcarving teacher who taught me about all the carvings. That was just something I couldn’t believe.”

When asked how it is to receive the award the same year as their spouse, both said they are elated.  Louise commented, “It’s a big thing. He’s been my best friend, so I think it’s great to share it with him.” 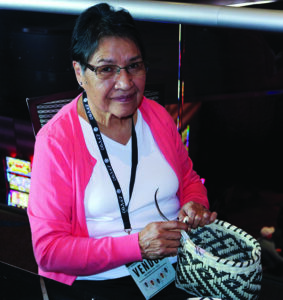 Louise Goings is shown working on a white oak basket during the Kananesgi Art Market and Show at Harrah’s Cherokee Casino Resort on Saturday, Nov. 5.

Both have a peaceful approach to their artistry.  Louise said, “After you get everything prepared and you get ready to weave, then you can just sit and weave and you can just think about anything you want to think about, go anywhere you want to and it’s just on your time. It relaxes you. I guess it’s kind of like therapy.”

Butch noted, “Well, when I sit down and do a carving like that, I usually tell my people that I work with to get that form of what you think the carving…get it in your mind. Once you get started, you just get absorbed with that piece of wood, or rock, or whatever you’re working on, and time just flies.”

When asked how many art pieces they’ve made over the years, both chuckled.  Louise answered, “Probably in the thousands, I guess.” 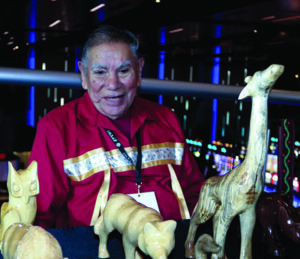 Butch Goings is shown in front of some of his carvings that he had for sale at the Kananesgi Art Market and Show at Harrah’s Cherokee Casino Resort on Saturday, Nov. 5.

Butch said, “I don’t really count. That’s similar to the people who say, ‘How long does it take you to carve this?’. I always say I don’t keep track of the time it takes me to do one carving because I’m doing six or several different ones. I’ll work this much, then think, ‘Well, this one needs a little work on it’ so I’ll work on it. Then when I sit down and get ready to start sanding, I always tell my wife, ‘Man, I like the carving, I just hate this sanding’.”

The couple both like to share their knowledge teaching the younger generation and encouraging them along the way.  “When I teach summer school, I always tell the kids, ‘Some of you have never had this in your home so this is the way we introduce it back to you,” said Louise.  “So, one of these days when you get to be a grown up and think about things that you might want to do to relax you or help you make a little bit of extra money, then you can think about doing basketweaving’.”

Butch said, “I’ve always said to take your time and think of what you’re carving and get that shape that you want it to be and carve it like you want your carving to be. Don’t try to make it look like mine or this person’s or that person’s. Just make it your own carving.”

In addition to Butch and Louise Goings, the following will also receive the award next May: Cornelio Campos, muralist; Rhonda Gouge, Southern Gospel and Bluegrass musician; and Richard Bowman, champion old-time fiddler.