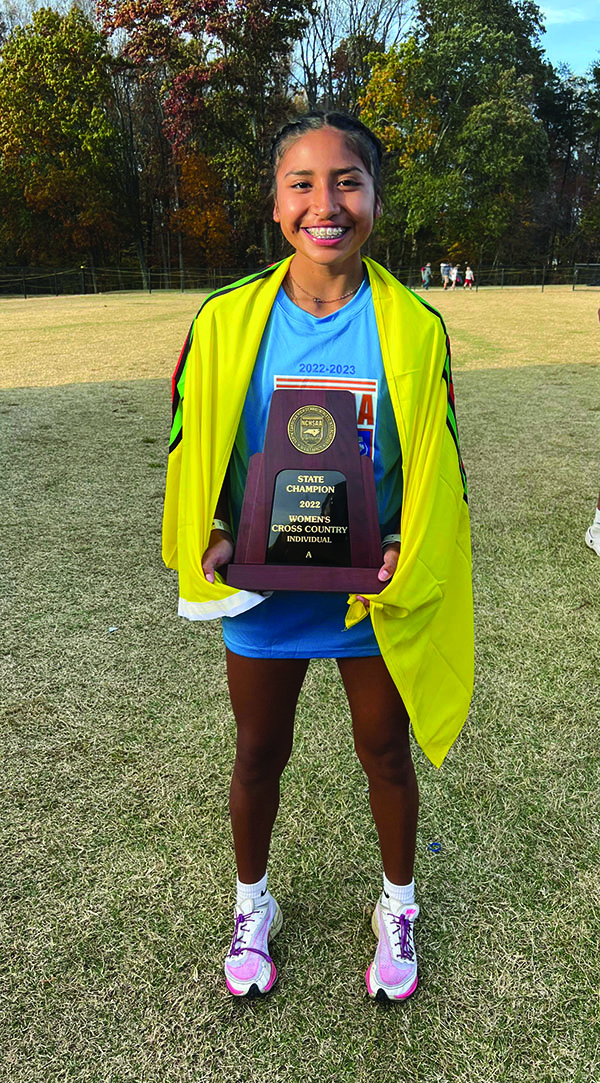 Draped in the flag of the Eastern Band of Cherokee Indians, Dvdaya Swimmer, Cherokee High School (CHS), holds the 1A Women’s State Cross Country plaque she won at the championship meet held at the Ivey Redmon Sports Complex in Kernersville, N.C. on Saturday, Nov. 5. She won the women’s state title race with a time of 20:08.32. (Photo courtesy of Micah Swimmer)

When asked how it feels to be the first CHS runner in history to win a cross country state title, Swimmer replied, “It feels great!”

On the race and the preparation leading up to Saturday’s race, she noted, “The race was very windy.  I tried to eat good and drink lots of water.  For practice, I stayed consistent and disciplined and made sure I gave 100 percent.”

Ahli-sha Stephens, CHS head cross country coach, said of Swimmer, “Making an appearance at the State Championships is something only the elite athletes of the state are able to be a part of.  Winning a State Championship puts you into another elite group.  Dvdaya set her goal early in the season and worked every single day towards that goal.  With Dvdaya being a multiplayer athlete, Coach Pam (Bryant, head volleyball coach) and I text every day about practices and games to ensure she got the most out of both sports and was able to compete at her highest level.  Volleyball has had a very successful season, and I’m thankful for a great coaching team at Cherokee who understands we must share athletes and work together for all our athletes to be successful.”

The CHS Braves team consisting of Jaylan Bark, Tyce Hogner, Aizen Bell, Tanin Esquivel, Tanis Esquivel, Aydan Thompson, and Oztin Swayney took second place in the men’s team event.  They actually ended in a three-way tie for first place with South Stanly and Christ the King – all three teams ended with 77 points.  A tie-breaker was held, and South Stanly won the title followed by Cherokee in second and Christ the King in third.

Coach Stephens said of the CHS Braves team, “This men’s team is something special and one that will forever be one of my favorites.  I had most of them since 7th grade when they started out on the middle school team.  They have grown so much in the sport of running.  Jaylan Bark took on the role of team captain the past two years and lead his team to two Conference Championships, two Regional Championships, and two state appearances and that speaks volumes of his character and leadership abilities.”

She added, “To be a successful runner, you have to love to run.  You have to train hard, and you have to be mentally tough. To be a successful racer, you have to combine those three things with hydration, nutrition, discipline and rest.  This team bought in early and made all these factors a priority.  They held each other accountable and pushed each other in every mile split Monday, 3.1.8 track workout, mountain run, and distance run. They accomplished many things this season and made cross country a cool sport.”

On the future, Coach Stephens commented, “Going forward, I’m excited about the future of cross country.  We have good middle school runners who will move up to create what I think will be a very successful woman’s team.  Our men’s team will return a few runners with strong runners moving up from the middle school team as well.  It’s exciting to have kids come up and ask about cross country or say they want to run next year. We have always taken one or two individual runners to state but now we are taking teams and competing for those top honors. Cherokee Cross Country has a bright future ahead of them.”

She added one more important message, “I want to thank my family for their support in allowing me to coach. Unless you have coached a high school sport before, you have no idea how much time away from your family it takes. Sgi, Jake, Kaden, Carter.” 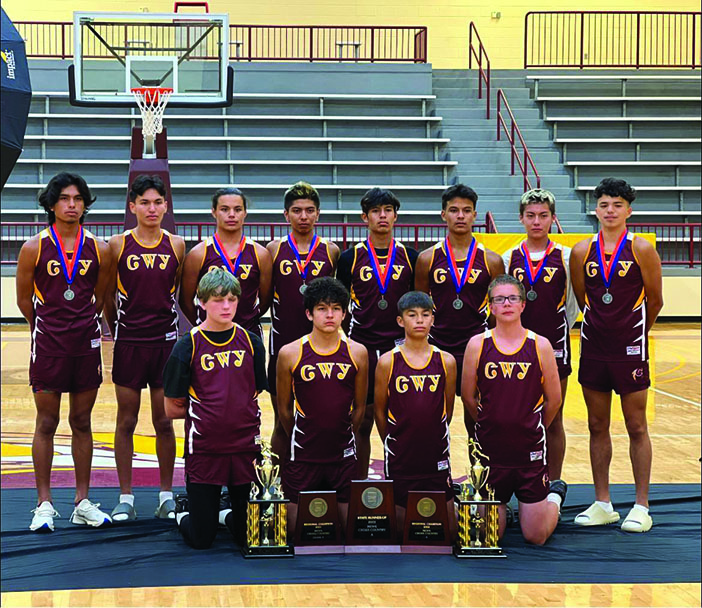 Results, per NC.milesplit, show the top seven finishers in each race plus all Cherokee High School finishers: