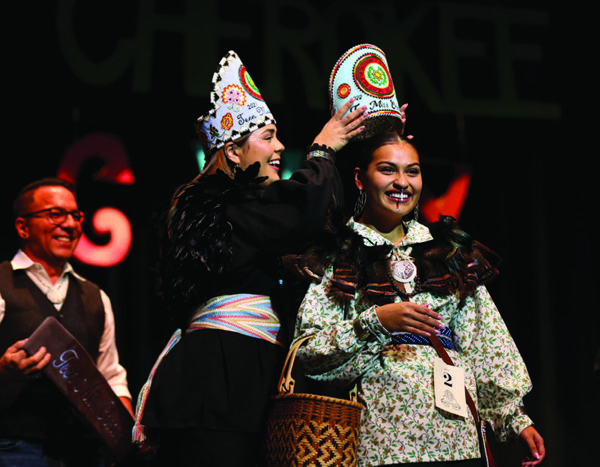 Alitama Perkins, a member of the Deer Clan from the Wolftown Community, will represent the Eastern Band of Cherokee Indians (EBCI) as the 2022-23 Teen Miss Cherokee.  She won the title during a pageant at the Chief Joyce Dugan Cultural Arts Center on the evening of Thursday, Sept. 29.

Cameron Jackson, a member of the Deer Clan from the Wolftown Community, was named first runner-up and Miss Congeniality, and Araceli Martinez-Arch was named second runner-up.

The three young ladies each spoke on a topic they feel passionate about.

Perkins spoke on historical grief and trauma of Native Americans.  “Tonight, I will be educating our people on historical trauma and how it affects up to seven generations. Historical trauma is a collective, cumulative emotional wounding throughout generations of traumatic events. These events do not affect just one person, but a community of people. Many people who have not directly experienced this trauma can actually feel the effects from it generations later.” 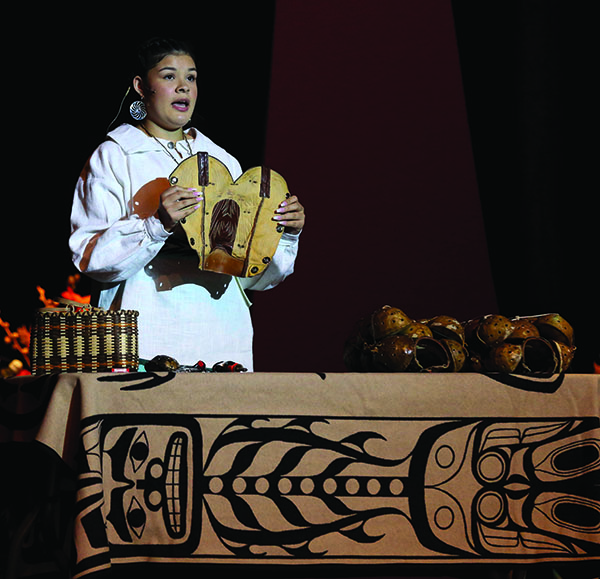 Cameron Jackson, a member of the Deer Clan from the Wolftown Community, demonstrates the method she uses to construct turtle shell Stomp Dance shakers. She was named first runner-up and Miss Congeniality in the pageant.

“Historical trauma for our people came from forced relocation, land disposition, boarding schools, day schools, warfare, loss of spiritual practices, and loss of language and culture. This can cause us to feel emotions of depression, fixation on trauma, sadness, anger, mood swings, and self-destructive behavior.”

Perkins went on to say, “Intergenerational trauma is passed down through the DNA of the person who has been genetically changed after experiencing a traumatic event. To break this cycle, we must begin creating a loving and open community. We must stop using drugs and alcohol in front of our children and seek help if you have addiction or feel explosive behaviors…please, continue to help me, and future generations to break this cycle.”

Jackson spoke on domestic violence rates among Native Americans – particularly violence against Native women.  “Domestic violence is when violent or aggressive behavior occurs within the home, typically involving the abuse of one spouse or partner. Even one’s child can be victimized by these situations.”

“Violence against Native women has reached extraordinary levels on Tribal lands. Statistics define the scale of the problem but do nothing to convey the experience of the epidemic. They tell part of the story but fail to account for the devastating impacts this violence has on survivors, families, and Native communities.”

She concluded, “I believe that we all have a part in putting an end to this epidemic and knowing this information can help our communities raise awareness and begin to break the cycle. Native people have a right to live free of abuse.” 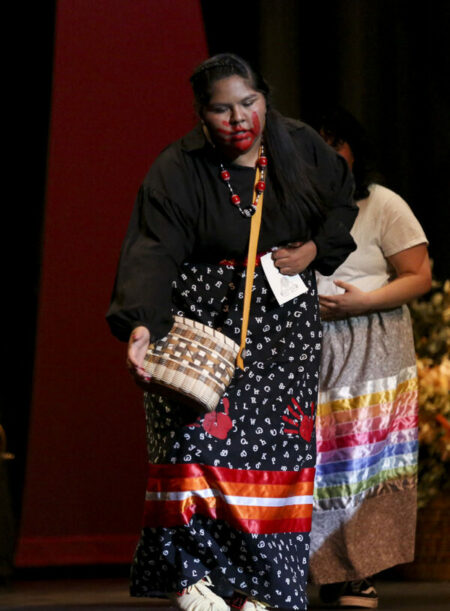 Araceli Martinez-Arch, a member of the Deer Clan from the Wolftown Community, demonstrates the Cherokee Gathering Wood Dance. She was named second runner-up in the pageant.

With a red handprint emblazoned on her face with paint, the symbol used to represent the Missing and Murdered Indigenous Women (MMIW) movement, Araceli Martinez-Arch spoke on the issue.  “No matter which clan we come from, we must always remember that we are one as Cherokee people, the Principal People…I will be a voice – a voice for Missing and Murdered Indigenous Women.”

She spoke bravely of her own experience with a violent attack.  “With the Cherokee SWAT team surrounding our house, my mother and I fought for our lives, almost becoming another statistic for Murdered and Missing Indigenous women. This is why this topic is so important to me.”

Martinez-Arch said that cases have skyrocketed in Indian Country.  “We have almost 8,000 reported cases of Missing and Murdered Indigenous Women and girls throughout Indian Country today. 32 EBCI members, 10 of which occurred on the Qualla Boundary…I want to put an end to this tragedy here and now. I will stand up.”

The contestants also modeled traditional wear during the pageant.