In August, Harris Regional Hospital launched a program that could change the landscape of sexual violence in Jackson County and the neighboring region.

Harris Regional now has six trained and certified forensic nurses, or forensic nurse examiners (FNE), on staff. One of these nurses will always be on duty and will have the flexibility to be called upon in the region. Katie Miller is one of the six that earned their certification. She said that this area is in desperate need for more certified forensic nurses. She explained that not having this service can cause severe trauma to those who have experience sexual violence. 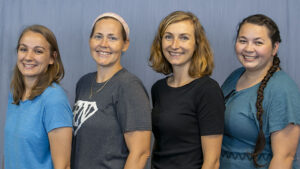 “When we got a Western student back in June, it did not go well. The patient got here to the ER, waited for several hours, and was told she needed to go to Asheville. So then, she went to Asheville and had a 3 a.m. exam, and then came back. That is exactly the situation that we’re trying to get rid of,” said Miller.

She explained that this circumstance has been all too common in Western North Carolina. On top of putting individuals in uncomfortable situations, it can also lead to less reporting of sexual assault. Just before the launch of this new program, Miller led a discussion with multiple regional stakeholders. Among those was John Thomas, assistant Chief of Police for the Sylva Police Department.

“This is a great thing. This evidence is very important for prosecution and having it local and not having a victim having to go all the way to drive an hour is going to have, hopefully, more victims agree to have this examination done. Help us get some justice for them,” said Thomas.

He said that receiving this kind of boost to the community is very helpful to the justice process, especially for his department of just 15 officers.

Now, what does it mean to be a certified forensic nurse examiner? It takes funding, for starters. Miller said that they underwent 45 hours of classroom work and 16 hours of hands-on training in Columbia, S.C. Beth Hodges was another nurse with Harris who went through the FNE certification, and she walked through what distinguishes their role. These nurses are trained on how to handle specific situations and how to perform examinations that can be used in prosecution. They are often brought into the courtroom to discuss evidence.

“As an FNE, we are there for the evidence. We are a neutral part in this. We are nurses, so we’re going to care for this person as our patient. But we would also care for even the perpetrator, whoever’s being presented. We still have to collect that evidence too, obviously in a specific manner. We’re there to collect evidence. So, when we present in court, we’re there to present evidence…what did we find, how did we find it,” said Hodges.

Chelsea Burrell, marketing manager for Harris Regional Hospital, said that she wants everyone to know this service is available. She said that it is vital that Western Carolina University (WCU) is involved in that communication, as college students often lack the resources when they’re forced into situations involving sexual violence.

“Awareness is really and truly all that we’re trying to garner at this point. Just making sure that your students, faculty, and staff know that this service is available right here. They don’t have to go anywhere else. I think that’s the first and foremost important piece of all this. For us to support you by offering the service, and for you to support us in letting your people know it’s here,” said Burrell.

Miller followed this by stating that another population they are hoping to support is the Eastern Band of Cherokee Indians. She said that they want to spread awareness and develop a better rapport with the Tribe and the Cherokee Indian Hospital Authority (CIHA).

“Based on national statistics, I think [the program] will be very useful. I mean, the statistics for sexual and domestic assault and violence for Native Americans is horrifying. Making this resource available to the Tribe, it goes back to reactive vs proactive. I think having these nurses available, you could say it’s reactive. But you could also make a strong argument to say that this is proactive. Because not only are we helping someone with their physical health in the moment that it happens, but I think even more importantly we are the first step for mental health. I think mental health is the lynch pin for having a strong, healthy, and vibrant future,” said Miller.

“We really want to be part of the healing that happens, especially for our Tribal neighbors and community members,” said Miller.

There is a similar program that is in the works for CIHA, and an article detailing those efforts is forthcoming. Until there are certified FNEs in Cherokee, Tribal members will still have access to the services at Harris Regional. Miller said that the only concern with operating with the Tribe has to do with jurisdiction.

“One thing that we haven’t figured out yet is each kit is specific to each state. Because the Tribe is Federal, I’m not sure if there’s a federal kit that they like to use,” said Miller.

The Cherokee One Feather spoke with tribal prosecutor Shelli Buckner to address these concerns. She said that while jurisdiction can play a role in the prosecution process, the situation Miller was worried about is less complicated.

“Even if the Feds might pick up one of our cases, they can still go to the state crime lab, which is where our controlled substance submissions go, typically speaking. As well as the sexual assault kits and other forensic analyses,” said Buckner.

She said that communication needs to be top priority for folks on the Boundary so that these services can be beneficial to the Cherokee community. Buckner also said that she is excited for this program at Harris and is willing to do what she can to build those bridges of communication.

“It sounds like that’s critical and that’s something we need to be working to establish. We need to communicate as a criminal justice community and establish a connection there, to where they feel comfortable asking those questions. And over time, hopefully, have less need because we’ve done a good job educating one another on both the needs and the services.”

The forensic nurse program is now in place at Harris Regional Hospital. Miller said that she and the other nurses involved in the program understand the magnitude of their role and are excited to offer what has been a missing service to the community.

Anyone needing to access a forensic nurse for sexual assault, or anyone with questions about treatment options or resources, please call 586-7382 or visit www.MyHarrisRegional.com.