“Last year we built it, and I feel like this year we’re crafting it,” said Bailey Frankenberg, who plays Lucy Westenra in “Dracula: The Failings of Men”. 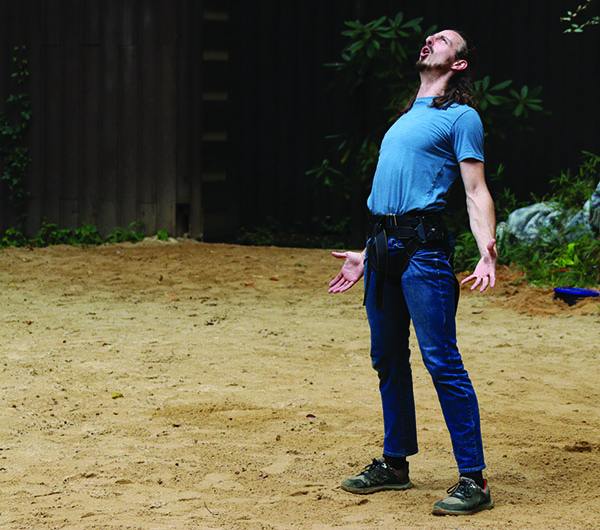 Benedetto Robinson is returning to play Dracula for the second straight year at the Mountainside Theatre. He is also the scriptwriter for the show. (JONAH LOSSIAH/One Feather photos)

Havoc Movement Company is back for the second running of “Dracula” at the Mountainside Theatre in Cherokee. The performance is being put on with the Cherokee Historical Association and is now Havoc’s third show to run at the theatre. After performing their version of Alice in Wonderland this April, the company is ecstatic to bring back “Dracula”.

“It’s such a rare opportunity that it basically feels like stolen time. It feels surreal in that way. You never get the opportunity to redo something like this. For it to be one of my favorite shows I’ve ever done, it feels great,” said Frankenberg.

Jake Guinn, director of the show, said that they didn’t want to just bring it back, they want to make it better.

“I started the process by asking everybody what worked best for them, and what was the worst part of last year for them. Because they’re experts of the experience. They did it every night,” said Guinn.

He said that the team is very comfortable with the space now, and they have a better understanding of how to take advantage of what the theatre has to offer. They have new rigging systems that they’re more confident in, which means they can ramp up the aerial displays. And then there’s the blood.

“People loved the blood effects last year. But it wasn’t enough for me,” Guinn said with a chuckle. “We really, really leaned into redeveloping our blood effects. The blood is something that I’m really excited about this year. I was already excited about it last year. It’s just that we don’t get to do blood like this in indoor spaces. We can only do this sort of thing outside.”

A major change coming to “Dracula” is the addition of a preshow. In last year’s performance, the audience followed the beginning of the show across the nooks and crannies of the Mountainside Theatre with hopes of developing an interactive experience. That has been tweaked.

“The main narrative is going to happen on the stage. But what we’ve done to keep the interactive experience is we’ve got an interactive preshow. For people with mobility issues that might not be able to keep up with the kind of pace we tried to set, they can do it at their own pace now … They can see the fire performance, they can see the aerialists, and experience all that and get in the mood to sit down and watch the show.” 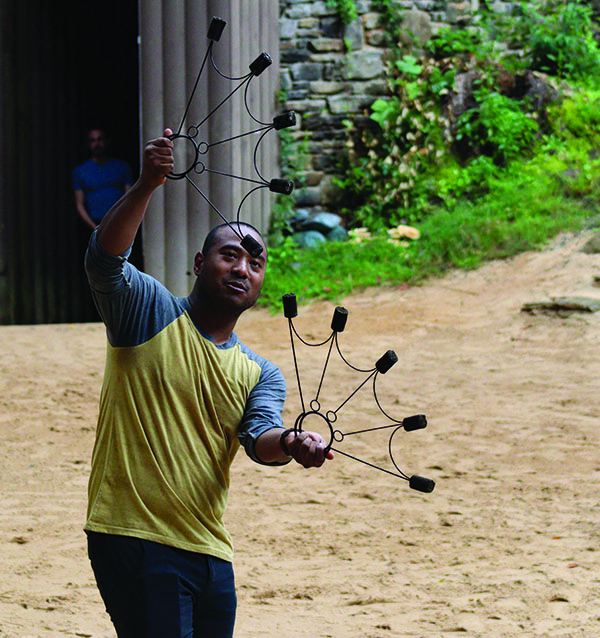 There were also some amendments made to the script. Benedetto Robinson, who plays Dracula, is also the scriptwriter for the show.

“The biggest changes were made in the second half of the show. The arc of the show remains the same. Some of the changes we’ve put in place were for clarity of communication to the audience about character motivation. Also, the momentum of storytelling. We didn’t want to go to a place where we had all of this action and stopped to talk about the expedition for a while and then get back to the action. The changes are in place so that it flows more cleanly,” said Robinson.

He has stayed busy in the last year, performing Shakespeare in Atlanta and helping to reshape the performance of ‘The Lost Colony’ in Roanoke, NC. Robinson said that he is so grateful to have the opportunity to come back to Cherokee and work with this cast and crew again.

“This project is, of course, very dear to me as the writer of it. But it’s just been the most fun that I’ve had as an actor in my career. It’s like a little boy’s dream. You don’t always get to play with swords and fly in the air. And this place. I don’t even know what to say about it, aside from that it is special in a way that many places are not. Lucy has a line about it in the play. It’s easier to breathe up here. It tastes better to breathe in this space. It’s a healthier place to be.”

Robinson said that every change and addition has been made with a lot of care. He said that it’s the experience and confidence of the team that makes him so excited for this run.

“It’s going to be good this year. I hope I don’t sound super egotistical when I say that I know it was good last year. It is much better this year.”

Havoc Movement is a tight ensemble. “Dracula” will have six primary actors and two others that will be part of the preshow. Something that every member of the show has mentioned is the chemistry with the roster. Every actor from last year has returned, and the two pre-show performers were part of the cast for Alice in the Spring.

“The ensemble building that’s been happening since we got going again with “Dracula” last year, we’ve just been on a mission to increase our training opportunities with company members. That way we’ve got a deep bench. Honestly, it’s a family,” said Guinn. 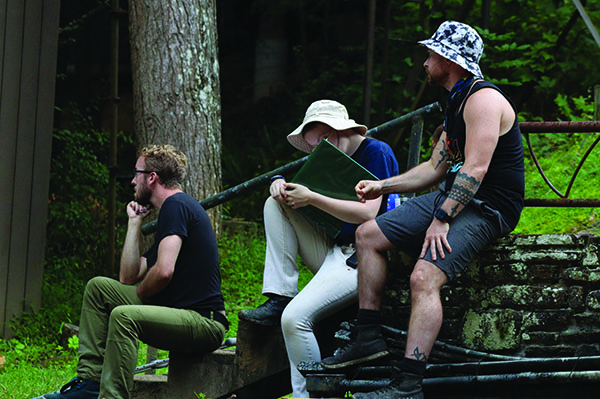 He continued by saying that the feeling and objective has adapted as well. Now that they’ve spent much of the last year in mountains, Guinn said he and many of the team feel a responsibility to the local area.

“The show isn’t just about what we’re doing on the stage. The show is about the community event of it. We’re all buying into it. The show feels like we know who we’re doing it for now. Because we’ve been here longer. We’re tapping in more and more into what I think people around here actually want.”

Frankenberg is a prime example of growing into the space. This is her second run as Lucy in “Dracula”, she was Alice this spring, Wilani in “Unto These Hills”, and will be reprising Wilani in “The Gathering”. She also earned this year’s performance award for her involvement in Unto These Hills. As someone who is a citizen of Cherokee Nation and part Choctaw, Frankenberg says that it has been an honor to work in Cherokee.

“I grew up as an Oklahoma farm girl away from either Cherokee or Choctaw communities. It is an identity that was very central to my family. I haven’t been able to, in my adult life, be in a community like this. Especially the fact that I get to be with the Eastern Band and in a Cherokee community here in the mountains. It’s an opportunity that I’ve dreamt about my whole life. I can’t believe I get to have that. I feel so lucky and fortunate and humbled and grateful.”

“Dracula: The Failings of Men” opens Friday, Sept. 30 at the Mountain Side Theatre. Pre-show begins at 7:30 p.m. and the full show begins at 8 p.m. For more information or to buy tickets in advance you can visit https://cherokeehistorical.org/Dracula/.