The Cherokee Central Schools (CCS) Board of Education discussed the potential of some major changes in its meeting on Monday, Sept. 19. 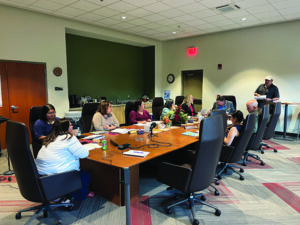 Howard Wahnetah, standing right, delivers the finance update to the CCS Board of Education during its meeting on Monday, Sept. 19. (JONAH LOSSIAH/One Feather photo)

First of which was to follow the lead of the EBCI (Eastern Band of Cherokee Indians) government and implement a $15 minimum wage across CCS. Finance director Howard Wahnetah offered a cost analysis for raising all employees below 15 dollars an hour up to that minimum. He said that his initial estimate was approximately 90,000 dollars in additional funding.

However, several Board members felt there needed to be a school-wide raise, similar to that offered by the EBCI. As part of the $15 wage minimum, the Tribe also announced that all other employees would be receiving a raise. This ‘living wage adjustment’ offered a range of a 3-6 percent pay increase, with employees on the lower end of the scale receiving a larger raise.

The Board unanimously agreed that they wished to get a new cost analysis for this CCS-wide pay increase. Wahnetah was tasked to create this and report back to the Board with his findings.

Wahnetah was also in attendance to provide the School Board’s finance update. He had nothing major to report. He stated that the Board was currently under budget projections through the first quarter of the school’s fiscal year.

The ‘good news’ portion of Monday’s meeting consisted of a visit from Cherokee High School principal Dr. Debora Foerst and English teacher Mindy Ledford. They were there to talk about an activity they ran for the Pre-K classes where they brought high school students in to read stories to them. They said it was very well-received and that many of the high school students want to repeat the event. Dr. Foerst said that it was a great way to get the older and the younger students interacting.

A large portion of the meeting was dedicated to a ‘first reading’ of some policy amendments that are being suggested by Board attorney John Henning of Campbell Shatley, PLLC. The Board asked for Henning to run through their policy and suggest any updates or changes to the Board for approval. According to Henning, many of these changes are minor. However, there are a few more significant potential changes that sparked conversation. A couple of these surrounded discipline protocol and the handling of contracts at CCS. Nothing has been decided on any of these suggested changes, and Henning said that he would be adapting his suggestions based on feedback from the Board in both open and closed session.

Following this policy discussion, the Board did move into an executive session for the remainder of their meeting. They had two guests, Angela Wolfe and Tim Swayney, and reported that they would be discussing ‘student and personnel issues’. They also spoke more acutely with Henning on some matters during the closed session.

The last items handled before going into closed session were the resolutions for the meeting. The consent agenda was passed after pulling four items for discussion in closed session. The passed agenda put forth the following:

The four items that were pulled were all passed following the closed session, and they granted the following:

The next meeting of the CCS Board of Education is set for Monday, Oct. 3 at 4:45 p.m. Meetings are being held in the Administrative Offices at Cherokee Central Schools. These meetings are open to the public unless there is a call for an executive session.