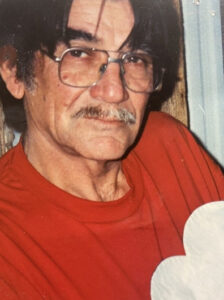 Richard James McCoy, 77, also known as “Greasy”, of the Birdtown Community, passed away on Wednesday, Sept. 14, 2022, after a brief illness.

Early in his life, Richard worked as a game warden for the Eastern Band of Cherokee Indians. He also worked as a carpenter and drywall finisher. He was a forager and loved living off the land gathering ramps, wild mushrooms, mountain greens, and ginseng. Richard was a true outdoors man and spent a majority of his life hunting wild game and fishing, but, above all, he was a bear hunter through and through. In his pastime, Richard enjoyed carving, watching the Minnesota Vikings and eating cornbread, pintos, and milk. If you knew Greasy, you know he would give you the shirt off his back and could bake a mean pineapple upside down cake.

He will be missed by many near and far. He loved his family and friends and cherished them until the end. When the angels called him home, he was ready with open arms and a smile on his face.

A visitation will be Friday, Sept. 16 from 4 p.m. to 8 p.m. at Longhouse Funeral Home.  The funeral will be graveside at the Birdtown Cemetery on Saturday, Sept. 17 at 2 p.m. with Dan Conseen and Dewayne “Bear” Lambert presiding over services. Pallbearers will be Malaciah Taylor, Colby Yanez, Omar Yañez, Roy Bradley, Jarrett Wilnoty, Duke McCoy, Joe McCoy, Roger McCoy, and Frank Oocumma.