Boyz II Men, a Grammy Award-winning R&B group from Philadelphia, will highlight this year’s Cherokee Indian Fair.  The trio, consisting of Nathan Morris, Shawn Stockman, and Wanya Morris, will perform during the Fair at the Harrah’s Cherokee Casino Resort Convention Center on Saturday, Oct. 8 at 8 p.m.  Doors will open at 7 p.m. 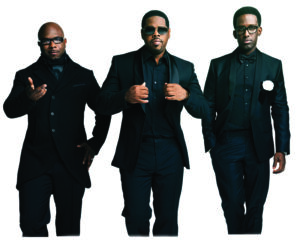 Tickets to the event are free to members of the Eastern Band of Cherokee Indians (EBCI).  Special EBCI Concert Ticket wristbands will be distributed on Wednesday, Oct. 5 all day (gates open to close) at the Fair ticket booths located in the parking lot adjacent to the Convention Center.  People will not be able to pick up a wristband for someone else.  All wristbands must be picked up by the person attending the concert, and each person must show their EBCI enrollment card at the ticket window.

On Wednesday, EBCI tribal members will have the option of purchasing tickets for their non-enrolled immediate family at a price of $30 per ticket.

All tickets not claimed nor purchased on Wednesday will go on sale to the general public on Thursday, Oct. 6 at the Fair ticket booths.  All of these tickets sold, to EBCI tribal members included, will be at a price of $30 per ticket.

Boyz II Men started in the late 1980s and have won four Grammy Awards (three for Best R&B Performance by a Duo or Group with Vocal and one for Best R&B Album).  They have also won three Billboard Music Awards and nine American Music Awards.

In December 1994, Boyz II Men accomplished a feat only done by The Beatles and Elvis Presley before them.  Their song, “On Bended Knee”, replaced their song, “I’ll Make Love to You”, as the number one on the Billboard Hot 100 list.

Information from Boyz II Men states, “The trio holds the distinction of being the best-selling R&B group of all time, with an astounding 64 million albums sold.”