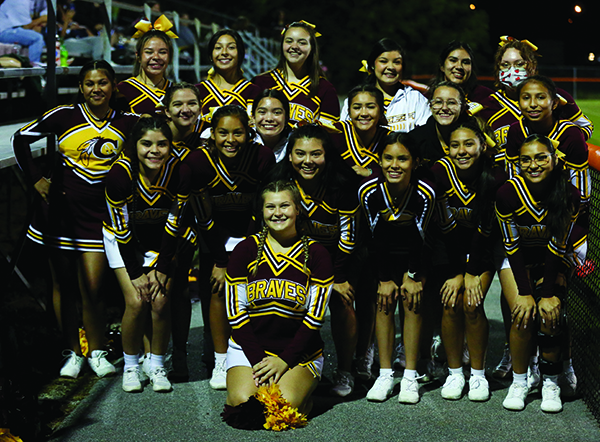 ROSMAN – Cherokee’s defense came up big in their first road trip of the year.  The Braves defense, led by Luke Climbingbear and Mato Grant with 11 and 8 tackles respectively, held Rosman to 144 total yards on the night as Cherokee got their first win of the year 34-8 over the Tigers. 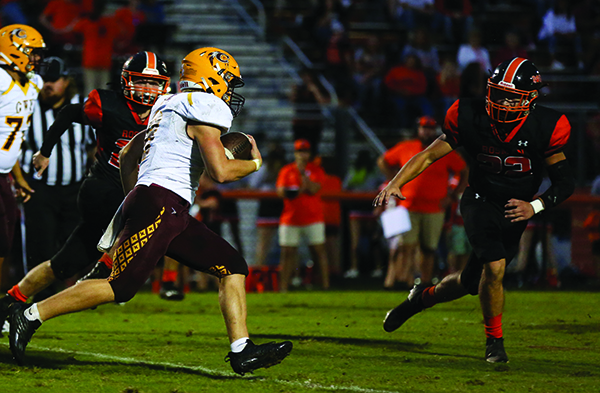 Cherokee’s offense was also effective on the evening gaining a total of 378 yards with 343 of those coming on the ground – a wet, squishy field at that.

Chase Calhoun led the Braves’ offensive effort with 17 carries for 126 yards and 2 touchdowns.  Tso Smith, Braves quarterback, completed 4 of 7 passes for 35 yards and added 110 yards on 12 carries with 1 touchdown on the ground.

The first quarter of this game was scoreless with two Rosman drives ending in punts and one Cherokee drive ending in a punt and their second ending in a fumble.

Midway through the second quarter, the Braves got on the board on a 31-yard run by Calhoun.  Mato Grant added the extra point, and Cherokee led 7-0.

Two plays into Rosman’s next possession, Michael Driver intercepted a pass and took it 47 yards to the house.  Grant added the extra point, and Cherokee extended the lead to 14-0 with 4:30 left before halftime. 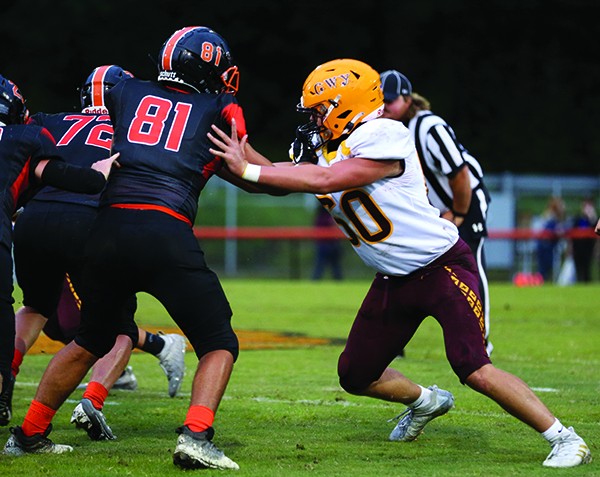 Cherokee’s Luke Smith (#60) gets a good push on defense. On the night, he had 6 tackles – part of a stingy Braves defense that only allowed Rosman 144 yards of total offense.

The Tigers turned the ball over on downs on their next possession.  Cherokee started their next possession at the Rosman 26-yard line and drove down the field on a quick six play drive culminating in a 1-yard touchdown by Smith.  Grant added the extra point again, and Cherokee took a 21-0 lead into the locker room.

Cherokee started the third quarter in good field possession at their own 45-yard line following a failed onsides kick by the Tigers.  Smith ran 22 yards on first down taking the ball to the Rosman 33-yard line.  Following several plays and a facemask call against Rosman, the Braves set up shop at the Tigers 9-yard line.

On third and goal from the 2-yard line, Calhoun ran in for the score.  Grant’s point-after was good, and Cherokee led 28-0 at the 8:43 mark of the third quarter.

Rosman had the ball for one play on their next possession.  On first down, Cherokee’s Noah Long recovered a Tigers fumble at the Cherokee 48-yard line.

The Braves ran into some penalty trouble on this next drive and turned the ball over on downs at the Rosman 25-yard line.  Cherokee’s defense held tight causing a three-and-out for the Tigers who punted with 1:22 left in the third.

A minute into the fourth quarter, Kaden Trantham darted 51 yards for a touchdown.  The two-point conversion try for the Braves failed, and Cherokee led 34-0 with 11 minutes left in the game.

With just under two minutes left in the game, Rosman’s Blake Holden picked up a Cherokee fumble and ran 15 yards for a touchdown to get the Tigers on the board.  Rosman converted the two-point conversion making it 34-8 with 1:23 left in the game.

Cherokee ran out the clock on their next possession, got on the bus, and went back to the Qualla Boundary with the first win of their season in tow. 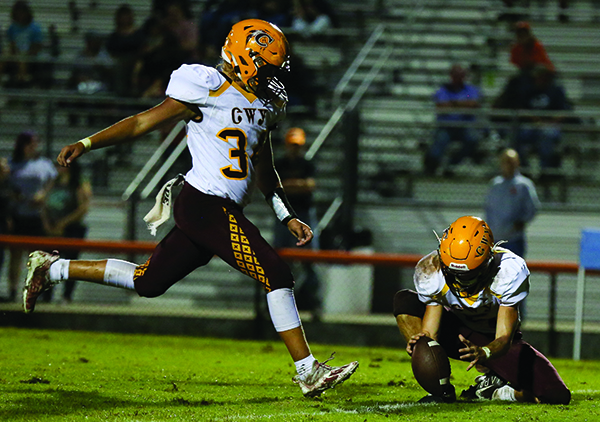 Fourth Down Efficiency: Cherokee 1 of 3, Rosman 2 of 4