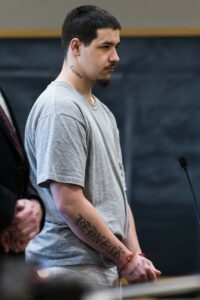 Fleeing law enforcement officers and, his lawyer said in court, while “strung out on methamphetamine” after abusing the drug for days on end, Dalton Suttles’ westbound vehicle slammed head-on into an eastbound pickup truck on U.S. 23/74.

Zenen Lopez-Guzman, 46, died in the wreck just inside Jackson County near the Haywood County line.

Senior Resident Superior Court Judge Bradley B. Letts consolidated the charge of flee to elude with the second-degree murder charge for the purposes of sentencing. He imposed a 194-month minimum prison sentence up to a 245-month maximum sentence.

At the expiration of that prison term, Suttles will serve an additional, consecutive prison sentence of 70 to 93 months for trafficking in methamphetamine.

On the highway, Suttles drove into oncoming traffic, weaving around several cars before slamming into the pickup truck.

In court and before sentencing, he apologized to the surviving victims and family members of Lopez.