Tuesday, Aug. 16 marked the groundbreaking for a new Speakers Building in Cherokee that will facilitate preservation of the Cherokee language. 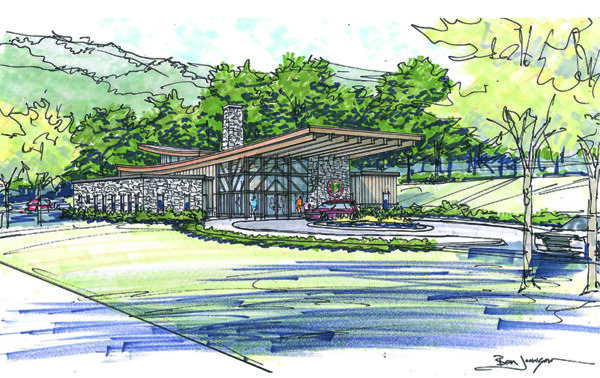 The facility will have multiple offices, a meeting room, a small library, recording room, classrooms, and more. The approximately 8,300 square foot building will be located on the grounds below the New Kituwah Academy.

“The Speakers Council will not have to look for a place to meet – where the speakers come to have the speakers gathering and have a consortium meeting with the United Keetoowah Band and the Cherokee Nation of Oklahoma. This new structure will enhance second language speakers and benefit our community. It will represent the community values of the Eastern Band of Cherokee Indians,” said Roger Smoker, chairperson of the Cherokee Speakers Council.

The building looks to be completed within 18-24 months once the final details are set. Travis Sneed, director of EBCI (Eastern Band of Cherokee Indians) support services, said that there are still ongoing negotiations for pricing and contracting. As soon those are finalized, construction can begin.

It will be a place to generate materials, meet, study, and teach. Beloved Woman Myrtle Driver Johnson spoke to the importance of having a single location for all these functions.

“I think about the teachers who had no place to work to generate materials for the children to use. But now, we will have our own building. Lord willing I’m still here. But we will now finally have our own building. The buildings I think of where materials were generated were the women’s shelter, the TOP building, Ginger Lynn, the Academy, and of course, the speakers building above there. Tribal Council, Chief, and Vice Chief, to me this is a dream come true. To have one place where we can develop these materials,” said the Beloved Women. 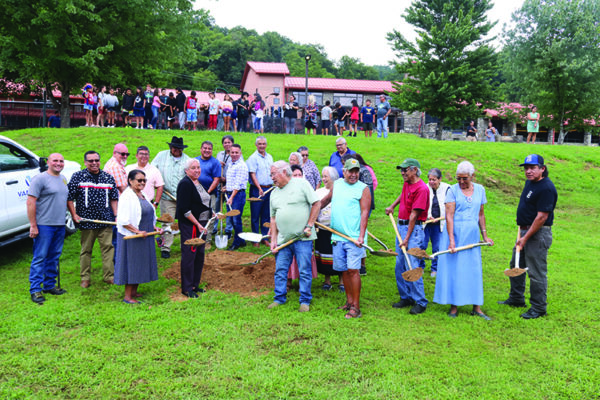 “The Cherokee Speakers Council is the culture and language resource assembly. They’re yours, they’re ours. And as I’ve said many times, a nonrenewable resource. I can’t replace you. I can spend time with you, I can record it, I keep it, and we can all hold it in our hearts forever,” said Lossiah.

“Many of the speakers are scholars and researchers of the culture and language. Some go all over the place. They go to the American Philosophical Society up in Philadelphia. They collect materials that people have collected long since and identify what they are. Is it medicine, is it something that everyone should see? Is it something the general public would understand? They can bring back words for some things that have been lost in time.”

Lossiah ran through the future functions of the building and how the design came to be.

“[The speakers] bring it back and they share. They give us full meaning and context for what they is. So, they’ve asked for a resource room. In this building, there will be a speaker resource room. They asked for a place to record close by. A lot of times they’re on a subject and they start talking it’s just a great conversation. Now, we have a recording studio in place,” said Lossiah.

He closed with words of encouragement and a Cherokee word to hold onto as the project moves forward – hidiyelisesdigwu, ‘let us all keep on keeping on.’

Last to speak was Principal Chief Richard G. Sneed, who wanted to emphasize the magnitude of this project. 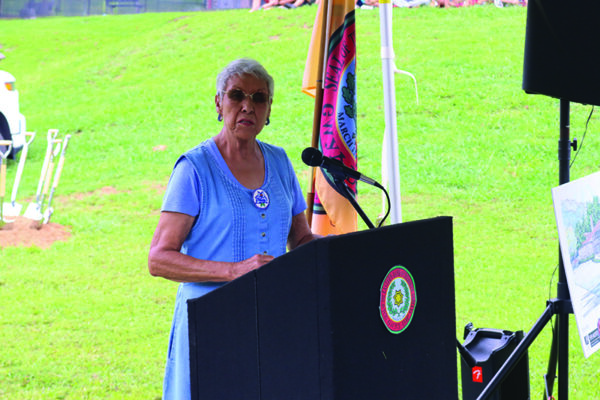 “Today’s a historic day. It’s historic because we break ground for a building that is quite possibly one of the most important buildings we’ve ever erected as the Eastern Band of Cherokee Indians on tribal land. I say this not because of the design of the building, as beautiful as it is. Or the size of the building. But for what this building represents,” Chief Sneed.

“To lose the language is to lose the very essence of our identity as native people. This building, as beautiful as it is, represents so much more than the brick and mortar that will construct it. This building represents the past. The past resilience and strength of our ancestors who refused to stop speaking the language. It represents the presence. The present courage, strength, and tenacity of our own people who have held fast and continue to speak and teach our language. It represents a promise. The promise to further generations and Cherokees who will use this space to teach and learn our sacred gift for generations to come.”

Chief Sneed finished by doubling down on the promise for language support. He said that they are looking to make the Cherokee Adult Language Learners (CALL) program a full-time position that would increase pay and maintain EBCI employee status.