(Reporter’s Note: Official statistics are not taken for junior varsity games.  All times and yardages are compiled by One Feather staff to the best of our ability.)

The Cherokee JV Braves started their 2022 season off with a commanding 46-6 win over the Rosman JV Tigers at Ray Kinsland Stadium on the evening of Thursday, Aug. 18.  Javon Garcia, Cherokee running back, got into the end zone twice on the night with runs of 10 yards and 4 yards.  Jack Jack Teesateskie, Cherokee quarterback, ran for one score and threw for another. 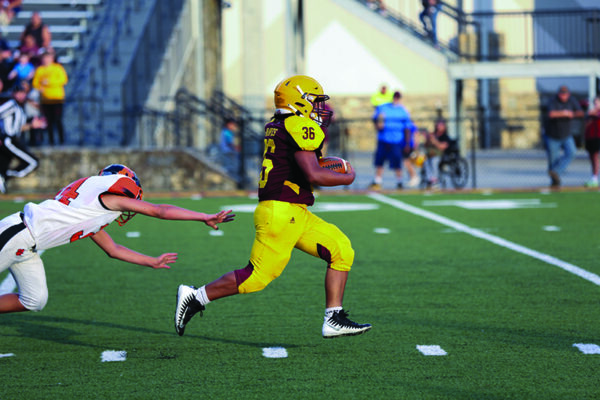 Cherokee dominated throughout with Rosman’s only score coming on the last play of the game.

Javon Garcia got the Braves on the board first with a 10-yard run at the 5:42 mark of the first quarter.  Emiliano Garcia ran in for the two-point conversion, and the Braves led 8-0.

Four minutes later, Teesateskie kept the ball on a quarterback keeper and ran in from the 1-yard line for Cherokee’s second touchdown.  Charlie Swayney ran in for the two-point conversion, and Cherokee led 16-0.

Early in the second quarter, Teesateskie connected with Jonathan Saylor on a 36-yard touchdown pass.  Swayney ran in for another two-point conversion, and the Braves extended their lead to 24-0.

With 1:39 left in the half, Javon Garcia ran four yards for his second score of the evening.  He then ran for the two-point conversion to give Cherokee a 32-0 lead.

Rosman got the ball and had a couple of nice runs making it down to the Cherokee 6-yard-line, but the Braves held and the half ended.

Midway through the third quarter, Emiliano Garcia ran 12 yards for a touchdown.  Then, Teesateskie threw to Emiliano for the two-point conversion giving the Braves a 40-0 lead. 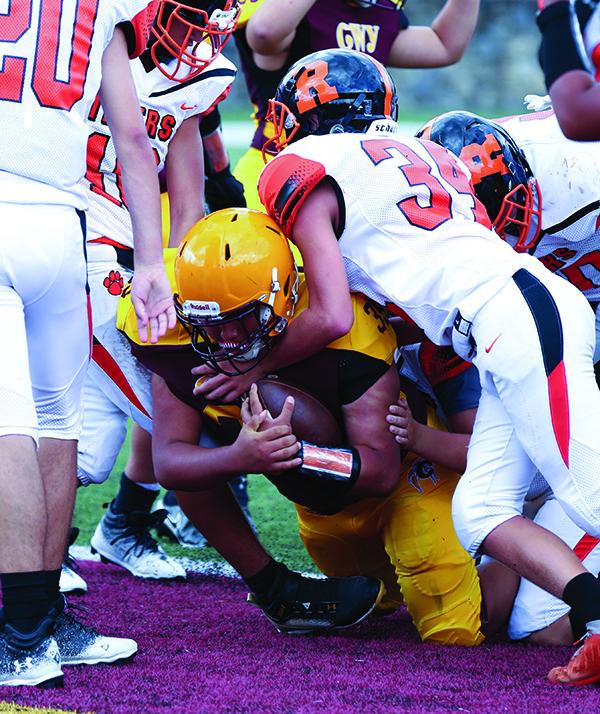 Emiliano Garcia (#35), Cherokee running back, blasts in for a two-point conversion.

On the next possession by Rosman, Cherokee’s Johnathan Rivera picked up a Tigers fumble and ran 59 yards for a scoop-and-score touchdown.  The two-point conversion failed – the only one on the night the Braves didn’t make – and Cherokee led 46-0.

At this juncture, the NCHSAA mercy rule went into effect and the clock ran for the remainder of the game.

Rosman drove down late in the fourth quarter and scored on the last play of the game as Mason Bell ran it in from 5 yards out.  The two-point conversion failed, and Cherokee won the game 46-6.

The JV Braves travel to Avery Co. High School in Newland on Thursday, Aug. 25 at 6 p.m.