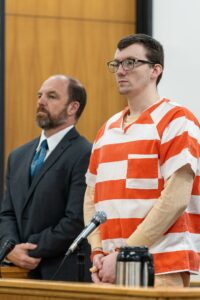 To the right of the defendant is one of his defense attorneys, Bill Jones. (Office of District Attorney Ashley Hornsby Welch photo)

Jesse Wilson, 26, pleaded guilty to first-degree murder in the May 11, 2017, death of three-month-old Liam Wilson.

The plea came about two weeks before his trial was scheduled to begin.

A jury conviction in the capital case would have meant he faced the possibility of a death sentence. After a verdict, the trial would have moved to a penalty phase, with additional information for jury members. Jurors would then decide whether the defendant should be executed.

“This case horrified and traumatized seasoned officers and prosecutors,” District Attorney Welch said. “We ultimately accepted the plea to spare jurors from experiencing that same horror and trauma while reviewing the case and other evidence, including photos.”

“In North Carolina, life in prison means for all his remaining days,” she said.

An autopsy showed Liam died from asphyxia and smothering. There also was blunt force trauma to his head.

Wilson was the only person present in the Marion Thomas Road, Franklin, house when Liam died.

“This case has been heartbreaking,” Macon County Sheriff Robert Holland said. “I’m glad citizens who would have served as jurors will not be traumatized by the evidence. They would have never forgotten it, just as we will not. He now has a lifetime to think about what he did.”