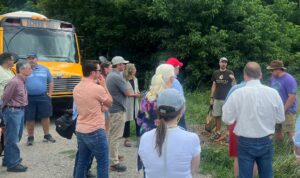 This photo is from the Tour on Day 2, the TSC visited Kituwah to discuss rivercane with David Anderson and Dr. Adam Griffith. The group rode the electric school bus there. (EBCI Natural Resources photo)

The TSC was formed in 1999 to help the EPA understand scientific issues by including TEK, which is culturally significant knowledge Indigenous people have possessed and evolved with over thousands of years. It seeks to build partnerships between tribes and government agencies, bring Indigenous knowledge into consideration when dealing with environmental issues that concern everybody, and address tribal science priority issues. Katie Tiger, Air Quality supervisor in the Natural Resources Department, has been a part of the TSC for the last 14 years serving as the Tribal Representative for EPA Region 4.

The second day, the EBCI hosted an afternoon tour where the TSC boarded Native Electric, the Cherokee Boys Club’s first electric bus. First stop on the tour was Kituwah mound, which was led by Catcuce Tiger. The next stop was Ela Dam, where EBCI’s Natural Resources Department is hoping to remove and restore stream health and redhorse populations. Finally, the third stop on the tour was the Museum of the Cherokee Indian, where the TSC got to experience Cherokee social dances led by Shennelle Feather and her crew.

John Blevins, director of EPA’s Laboratory Services and Applied Science Division, had this to say about the meeting: “It was by far the best Tribal Science Council meeting. The bar has been set very high for future meeting. Thank you again for your hospitality and the opportunity to learn about and see so many important parts of the Cherokee people and your lands.”